How it all started

Tugachinsk Kraslag: people and destinies. The editors of the newspaper "Prisajane" started their work on a new project. We report on the fates of people who, though innocent, endured much suffering and served their sentence in Tugachinsk Kraslag. 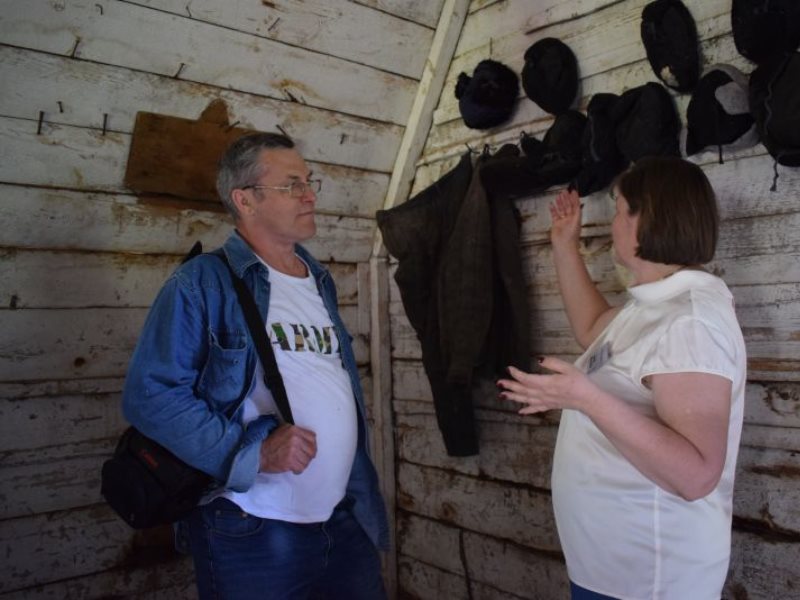 More than 60 years have passed since that time, when the departments of the GULAG began to dissolve, among them the Tugachinsk Kraslag. Right here, in our district, prisoners lived and worked under unbearable conditions. Some served their prison sentences under criminal law, others - were victims of political repression.

For many years their names fell into oblivion. One did not accept that it was talked about or even thought about. And residents of the Sayan district, including Tugach, became the initiators of the first open-air museum in Krasnoyarsk Territory: "Top Secret - Tugachinsk Kraslag". This event took place on June 10, 2018.

In 2009, the history teacher Ludmila Miller was the first to speak about the past of Tugach. It had happened that her father worked as an overseer, later as head of the barracks with a tightened regime in this camp. Little Ludmila lived together with brother Yuri and the sisters in a little house near the barracks. The family had contact with the overseers and the soldiers guards because the older children, Jura and Luba were only slightly younger. Many years passed. Together with her students, Ludmila Konstantinova began interviewing elderly people and writing down their history. These stories merged into an unbelievable drama. In each of the stories lies the tragic fate of a man who was innocently condemned and who lost faith in justice.

In 2011, the first anthology titled "From Siberia to Siberia" was born, which was prepared by graduates of the year 2011 of the Aginsk General Secondary School №2 under the direction of Ludmila Miller. In 2013, the second part came out. Both compilations are the result of a laborious search by students, based on documents from the regional "Memorial" organization. From the book of remembrance of the victims of political repression, the students selected the names of our compatriots. In the section "Judgments" - section 58 of the Criminal Law of the RSFSR. In the column "Place of execution, shot" repeat the unending lines - shot, shot, shot ...

On the initiative of the former head of the Tugatschinsk village council Nikolaj Starikow and Ludmila Miller a memorial plaque for the victims of political repression was set up on the site of the former barracks with tightened regime. The production of the tablets bearing the inscription was paid by former district head Alexander Antonov and Vera Leonteva. In autumn 2016, an orthodox cross was erected in the old cemetery of Kraslag, where prisoners were buried several decades earlier. In 2017, the project became the winner of the All-Russian Competition "Cultural mosaic of small towns and villages".

The museum gradually took shape. Initially, a number of street objects were reconstructed: a dam for rafting on the river, built with the hands of inmates, and on top of that an observation deck from which one could completely overlook the living and working areas; a barrack was also built by museum staff.
The first tour of the museum took place on the day of its opening. She started with the school museum. This is where things are stored by inmates found in the attic of one of the buildings. Next stop: the "club" - here the prisoners gave concerts, performed plays. And further - "Staff of militarized guards", "Ambulatory hospital", "Residential zone", "Production area", "Observation platform", "Stationary hospital", "Horse park", "Veterinary station", "Cemetery", "Reconstructed barrack", " Barracks with tightened regime ". The names of these objects speak for themselves. In them lies the life story of thousands of people, descendants of those who still live in these places today.

Their sentences served convicts from all republics of the USSR. During the war, Poles, Germans (they were no prisoners of war), Japanese, Chinese, Turks, Romanians, Greeks came here.

To date, it has not been possible to collect all information about the persons convicted according to § 58. However, it is known that in Tugachinsk Kraslag representatives of the intelligentsia, educated people, served their sentences: doctors, engineers, officers, clerics, artists. Many of them left the place after their release, some stayed and started their own families here.

Gradually, foreign journalists expressed interest in our museum. Tomasch Kisny, a Polish photographer and journalist, was in our district from 1 to 4 August 2018; he spoke with residents involved in the events that happened in the Tugachinsk department of the Kraslag, photographed museum objects; and on August 3, Nikolai Wert, a French historian, came to the Sayan district.

On February 6, in the settlement of Tugach, in the Sayan district, the solemn removal of a door from the camp building, which prisoners had built with their hands, took place; it was sent to Moscow for the exhibition of doors to the State Museum of History of the GULAG.

Last year, the newspaper "Prisajane" published the novel of our compatriot Mikhail Gafurov - "Escape (from the Sayan ridges)". It was written in 1983. Main topic of the story - the fate of Vladimir Rokotov, who served his sentence under § 58 in the Tugachinsk Kraslag.

This series of events led to the emergence of a new project, initiated by the newspaper "Prisajane". A name for it found itself immediately - "the Tugatchinsk Kraslag: humans and destinies". There is a lot of work ahead - the reconstruction of the life story of concrete people whose relatives carefully guard the memories of their mothers and fathers who passed through the Tugachinsk Kraslag. These memories are invaluable to us and our compatriots. For a variety of reasons, we cannot talk about them all because many of their relatives live scattered around the world. But we endeavor to gather as much information as possible about the sad history of our country with the help of human destinies. We report on extraordinary people who spent their exile in Kraslag. We are confident that our project will be joined by like-minded people, relatives who can help us gather information. Today we publish the first material about the life of a remarkable man with above average abilities - Khodsi Amirov.