First of all I would like to set the minds of our friends at ease, who read about the closing of the „Memorial“ office in the latest issue of „My Voice“. We do not close at all, but are in a process of re-registration. The following happened to „Memorial“: the tax authorities now insist upon receiving some documentary evidence on the registration of the „Memorial“ organization, which has to be issued by the municipal administration. But the municipal administration does not issue such documents, since a social organization cannot deal with entrepreneurial activities. Three years ago the statutes were officially approved and confirmed by the town Soviet and nothing illegal was found about them. In accordance with the existing laws of that time everything was in perfect order, but the laws have meanwhile been amended, and, as usual, we are again considered and treated as outsiders. In spite of this idiotic situation we are not badly disposed towards the state authorities: it is true, after all, that „Memorial“ is not engaged in entrepreneurial activities, that already since long nobody has transferred any money to our account, and the delivery of empty quarterly statements of account to the tax inspection (after the receipt of the third letter of invitation) has also become quite a cumbersome attempt to us – and it has become even more cumbersome to the tax inspectors themselves. I would like to take this opportunity as to say a few nice words about one of the officers at the central tax inspection office, O.V. Slavinoy: as it seems to be the case, one may strictly follow the law without looking at the taxpayer like an enemy of the people. In case the revenue officer talks to you in a polite and benevolent manner, then you will go and do what he is requesting from you without starting to quarrel. But if he screams at you, you will be immediately prepared to keep something in the dark from the State – just out of sheer spite. In reality, however, there is nothing to be kept in the dark: „Memorial“ does not pay any salaries, and the account has merely been showing a credit balance of about 18.000 rubels throughout the past few years, which are being kept there in the hope of bearing interests. 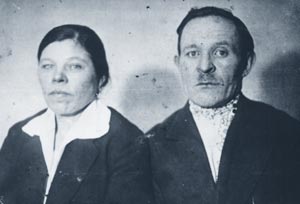 Thus, we do not have any claims against the authorities, but there is an utterly serious reason for the realization of the Rehabilitation Law. People, who intend to strive for the return of their property, will appeal to the regional committee, but from there they are sent back to the district committee. Principally, this is the correct way: according to law it is the district committees which are to be concerned about the decision of problems in connection with social welfare for rehabilitated persons and the return of confiscated property, and they should give these people support. However, the district committees can be compared to Unidentified Flying Objects: everyone talks about them, but nobody has yet succeeded to see or find them. I tried to get the whereabouts of these committees from the regional administration, from V.S. Kim, but he was unable to provide the requested information (!); instead, he suggested to simply phonecall the acting heads of the administration of social affairs, since they are the heads of the committees at the same time. Just at that time Klavdiya Mikhailovna Karlova addressed herself to „Memorial“ once again seeking for help. For the past five years she has been running from pillar to post, moving in circles through the corridors of the administrative machinery, trying to get back the house of her parents, which was confiscated in Zykovo. The regional committee just sent her to the district committee. She passed through EVERY SINGLE office room of the Berezovsk district administration – but nobody there had heard anything about a commission. Verbal statements, unforunately, cannot be kept in files, and so I, as an official person (the decision of the district counsil on the organization of a district committee was not declared void), sent a registered letter to the deputy of the Berezovsk administration with a notification to confirm the receipt of the letter (certificate of posting No. 59). In this letter I asked for information about a staff list (the make-up of the personnel) of the committees and their office hours – and that was all. However, the members of the committee, in case it exists at all, obviously conspired against me: neither did I not receive any reply, nor a confirmation that the letter had been handed over.

The mulish Klavdiya Mikhailovna went to Berezovka and, to begin with, forced an official confirmation on a blank form that the letter had never arrived and then – a verbal, inofficial confirmation of the acting boss of the administration that the letter had principally existed, but that it had not been registered for some reason or other and, apart from this, nobody had had enough time to reply to it. All right then, the matter concerning the correct delivery of the letter weighs upon the conscience of the Postmaster General, and the written answer to K.M. Karlova upon the mind of comrade Ananev. In this letter he notifies her that the decision about a return of the house lies within the competence of the courts, that the committee was unable to clarify and settle this problem, since it did not dispose of some badly needed legal powers. Which additional legal powers? The law unmistakably and unequivocably says, an this is written in black and white, that it is the duty of the district committees to take charge of these matters and attend to them carefully. The committee is to come to a decision about the return of the property, and in case serious conflicts and disagreement arise from this decision, well, then just let the person, who raises objections, seek legal redress. If the acting head of the district administration is unable to realize this, then we have every reason for urgently instructing him about the subject of discrepancies in office. In fact, „Memorial“ made such a proposition to the head of the regional committee A.S. Provorov, as well. We recommended to convoke a meeting of the regional committee to give them the opportunity to make a report about their activities and achievements. The letter was sent registered, on the understanding that the receipt confirming ist delivery to the addressee should be returned to us. I inform you about this fact, because the postal service might make trouble again; but in that case we will inform about our intentions publicly throught the newspaper.

Finally, the most important thing. The government issued a long-awaited ordonance on the return of the confiscated property of rehabilitated citizens. A remarkable document, unless there had been paragraph 4. It says in this paragraph that the formal request must not be presented later than three weeks after the coming into force of section 16 of the Rehabilitation Law. A very modest demand – and a demand of taste: the law was passed on the 18.10.1991; the rules definitely came into force on the 12.08.1994, but they still have not worked their way through to all administrative authorities – and the three years’ period is going to expire in a month’s time. It is true that section 16 came into force a little later, but that makes no difference: who does not succeed to present his request in time is too late. While the local authorities pass the victims of political reprisals to each other like a football, three years have passed, and the victims are confronted with a negative reply, which is already based on legal authority: why did they not consider this earlier? In the governmental circles none of those who were charged to work out these rules in detail three years ago suffers from this deplorable state of affairs, nor does the acting head of the administrative authority of social affaits, who did not even take the time to study the Rehabilitation Law. Once again it tis the victims of reprisals who have to suffer – and how many times did they have to bear misfortune and worry before! But then, ladies and gentlemen, please be not offended in case they vote for someone else on the occasion of the next elections, and do not be surprsied, if they refuse to offer you a helping hand, when the throne you sit on suddenly starts to rock. We recommend the victims of political reprisals to write and present their formal request without delay and exact from the authorities an acknowledgement that their request has been definetely registered: when they even lose registered letters and delivery receipts, who might then stop or discourage them from also losing your requests and from later pretending that they never existed, as a matter of fact? And again I expressly point out that the deadline for presentation expires within short!

Caused by the peoples’ reaction about the passed rules, I am unable to abstain from commenting on Zinaida Vinshtok’s doubts about the justness of compensations like these, an article one could read in the „Vecherka“ newspaper: maybe, every5thing will get into disorder; all of us have the blood of victims and executioners of those times in our veins, and we will somehow pay for that ourselves. With all due deference to Zina Vinshtok, who is an excellent programmer and publicist and a congenial woman, I permit myself not to agree to her opinion. Isn’t it yet enough that we let the executioners and common informers live on undisturbed until they have reached their relaxing and peaceful retirement age (it is even a problem to publish their names: maybe they have grandchildren!), and not very long ago, in the 1970s, the executioners continued to work in the places, where they had used to work in earlier times. Former victims of political reprisals received meagre welfare allowances and compensations which, by the way, had to be pressed out of the government in the true sense of the word. Is this correct and just in your opinion? And as far as the financial means are concerned, it is our task, the task of „Memorial“, to trace the whereabouts of the State funds and try to find out, whether they are not granted to any dubious companies as interest-free credits or used to finance the summer cottages of the generals, but spent as compensation payments for offence against property – and that the money is coming directly from the government.

However, this is not the actual point. From the juristic point of view the illegally confiscated property would have to be returned. As long as this is not being done, talking of a rule of law is out of the question. Elsewise the present government will take away everything it likes from whosoever and, if the others succeed in doing so – why don’t we? By the way, they have already started such actions. It is not my business to judge, whether the people of the MMM joint-stock company are a gang of crooks or not, whether they have a pyramid or not. But probably they are crooks. For some reason or other, however, it escaped from the people’s attention that the ruling powers, in quite a scandalous lawsuit with the MMM joint-stock company, merely confiscated a cash amount of a few thousand millions of rubels. Of course, they do not want to give them back, neither to the MMM joint-stock company, nor to their customers which they were so worried about. Maybe this was even the reason for all the discrepancies? Even if they repaid the money – then this would be done without considering the inflation rate and the fact that they have meanwhile made good money with it. This is typically Soviet! It goes without saying that I do not compare the dispossessed kulaks with the mumblers of MMM’s share-holders. I am worried about something else: the State treats ist citizens, now as before, in a rather „free and easy“, inconsiderate and humiliating manner.