“Without Adolf Hitler and Josef Stalin I would
have never come into the world.”

Recently, my classmate who lives in New York asked me during a telephone conversation: Did there actually remain any Jews in Krasnoyarsk?

“Well, and what are they doing there?” the programmer of the Chase Manhattan Bank, former Soviet physician and a good friend of mine, continued his questioning with a mocking undertone.

I felt offended. I could have given him 10 family names of well-known persons, beginning with my stairway neighbor, director of an airline company. But first of all I recalled the surname Birger. Vladimir Salomonovitch Birger, one of the initiators of the Krasnoyarsk “Memorial,” an unselfish, straight man, a declared altruist who sacrificed a considerable part of his life for service to his native country: My mystic Russia that nobody has seen, although everyone knows how beautiful it can and should be. 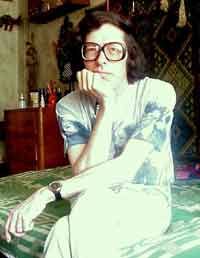 Question. Volodya, do you have Siberian roots?

Answer. On my mother's side, yes. The Kotchergins from Taishet. And the grandfather from my father's side came from Lithuania.

My father worked as a planner. He was arrested in Ukrainia. He was jailed in the Orlovsk “Central Prison” and taken into the Norillag in 1939. From 1945 he was imprisoned in the 8th camp division located in Krasnoyarsk. My father's first family lost their lives in Charkov during the occupation. He then married my mother in Krasnoyarsk.

Well, without Adolf Hitler and Josef Stalin I would have never come into the world. But it is not necessary to thank them for that, is it?

A: In 1956 my parents moved to Ukrainia. After school I entered the Charkov faculty of mechano-mathematics but was suspended due to my dissident attitude.

Already then I realized that the country I lived in is one issue, but the regime within is another matter. Next the intervention against Czechoslovakia began. Some students had a lot of questions concerning this affair, but the state security, on its part, asked as well, and in particular they asked me.

At the beginning of the ’70s some university people were even sent to prison. They dragged me off to the KGB and prevented me from obtaining the academic attestation: “Because of an attitude that was incompatible with the appearance of a Soviet student. In 1994, I donated the certification to the Charkov “Memorial” museum.

Q: Well, were you sent to Siberia?

A: I went of my own will to stay with the relatives on my mother's side and started to work in the computing center of the KRAS. There I found a non-disassembled “Ural,” one of those huge calculating machines of those times: an imposing installation, the dream of Zurab Tseriteli, a control desk 5 meters in width.

The 70s were sinister and depressing years. During this time I advanced my cultural level. It was difficult to get hold of literature. I was compelled to learn Polish in order to read what was not published in the Russian language. It was a period full of reflection. I figured out that a regime such as the Breshnev one could not carry on any longer than 1983-84. I understood that the country was exposed to a period of instability.

At that time they asked me what I thought of Solshenitsyn. I replied that within 20 years students would feel hatred for him for having written so many bulky tomes.

Q: Did you ever intend to leave the country?

A: I had thought about emigrating, but after all I wanted to watch how everything would turn out.

Q: And when you realized that political changes were not too far away.

A: The invasion of Afghanistan, this probably was the last ringing of the USSR. Then came Suslovski with his reforms. A very popular TV broadcast at those times was the “coffin races.”

After Breshnev’s death I understood that it was necessary to be prepared to take action. It was a strange thing. I was sure the whole matter would end up in civil war. Until today I do not have the slightest idea how the empire could practically collapse without a single sound. Russia was indeed very lucky!

Q: When did the Krasnoyarsk “Memorial” appear on stage?

A: In 1988, through the “Litgazeta,” a literary magazine, I got in touch with Lev Ponomarev, the future founder of the “Democratic Russia” movement, who sent me the copy of a list of collected signatures for the purpose of founding a memorial in Moscow in remembrance of the victims of Stalinist repressions.

I mimeographed the form and brought it into circulation. Irina Kuznetsova also started to collect signatures. And then Alexej Babij joined us. We lacked experience for this type of serious business so we turned to Vladimir Georgyevitch Sirotinin, the “experienced” dissident, who was working at the Solshenitsyn Foundation, for assistance.

At our request he agreed to take charge of the Krasnoyarsk “Memorial”, and actually he did not resist this idea too much. The collection of signatures was, in fact, a political action. We noticed people in the process of overcoming a deep-rooted sense of fear and dull indifference.

In June 1988 we organized the first free demonstration for 70 years in Krasnoyarsk, together with the Committee for the Advancement of Perestroika. Several thousand people gathered. By July 1988 we had collected more than 2,000 signatures, which were forwarded to Moscow. We then set to work, work that is still carried on today. We study the history of communist terror, the 70-year struggle of the Leninists, Stalinists, etc., against the nations oppressed by them, starting with the Russian and ending up with the Afghan. We are particularly interested in those incidents that took place in the Krasnoyarsk region.

Q: This history is written by people with whom “Memorial” is in constant contact. Didn't the throng of people diminish in the course of the past 10 years?

A: A constant throng is guaranteed to us until 2018 when those born in 1958, the year of the mass release from exile, will retire. Those who were born in exile are entitled to rehabilitation. And since the rehabilitation status does not bring about any practical benefit before the retirement age has been reached, many people take up the subject only when time has come to settle the formalities at the social welfare office.

Of course, there were exiled persons even after 1958. Lithuanian and Latvian citizens, for example, were kept under military command until 1960 and even longer; we do not know why. Some exiled Ukrainians, subject to the 1951 deportation, were only released in 1963; however, these were not such large-scale happenings anymore.

The last big flood of exiled people started in 1961 as a result of Chrushtshev’s famous “Idlers' Decree.” By reference to this decree the great Brodski was condemned. Exactly by reference to this decree they convicted the great Brodsky. But not only creative people suffered in these times. Thousands were deported into our region because of their faith: true Orthodox and disciples of the Pentecostal Church. As a rule they were sentenced to five years whenever this decree was applied. We have already succeeded in obtaining rehabilitation in such cases.

Q: At present you are holding the consulting hours. Is this task a difficult one?

A: On average, about 15-20 people turn to us every week. I try to solve their problems and process the formal requests. The decision about concrete issues might require several months. It often becomes apparent that you have to ask archives in other regions for information on relatives of the people living in Krasnoyarsk. As a result, this person will receive a certification “on his recognition as a victim” and on corresponding fringe benefits. Sometimes people come here with the intention of getting such a certification, but from their documents we find out that they have lived in exile, and this means they are entitled to rehabilitation, as well.

Q: Volodya, you are performing a needed task. Does it give you pleasure?

A: Yes, I feel gratified when people receive compensation, rehabilitation or fringe benefits. But this is not all. “Memorial” is a society for historical research and only then comes the term “Protection of Human Rights.” For me the consulting hours represent an indispensable source of information, particularly since the archive documents were often issued by the hands of the executioners and their accomplices. The events look as if seen in a distorting mirror. Testimonies straighten these curvatures. They are usually inexact, but one can easily recognize the horrible face of communist terror. We patch up historic scenes from tiny fragments.

I am interested in this as a researcher. Everybody should know about the history of his native country. When asking someone, for example, who is just accidentally passing by about this Buchenwald, he knows to reply something evident. But when you question him on Yennisseystroy or SibULON or Gorlag? Well, one should also know about this far-away Buchenwald, but all the more about one's own homeland. Even though our history is not a pleasant one in every respect, nothing can be done about that. In retrospect we cannot obtain a different one. “I would not want a different history for us”, a great poet once said. Well, I do not know what he would have said if he had lived until the victory of the Leninist idea...

Q: How about your attitude towards the present campaign in Chechnya?

A: From 1994-1996 there was a real war in Caucasia. The collapsing Soviet empire stung back “from the other world.” Then the scene does not look that clear anymore. Meanwhile the actions of the army seem to have responsible character. But assuming that this is an anti-terrorist operation, the army should not take part in it. When the army invades Chechnya, it means that there is a war. The violation of legal norms is not justified by any benevolent intentions.

Q: Are you concerned about future parliamentary elections?

A: I think we are on a right and just path and victory will be on our side.

Q: Are you religious?

A: Apparently the Almighty made me an atheist.

Q: How about your relation towards money?

A: It is normal: Money is something you need. But if I had a big amount, I don't know. This never happened.

A: Now, yes. There is this feeling of a useful existence. Of course, this concerns my work at “Memorial.” I would like to say as a reminder that the consulting hours are being held in the House of Technics on working days, as from 17.ooh. Telefon: 65-13-85. Internet page: www.memorial.krsk.ru. In case you have any unanswered questions on repressions or rehabilitations or seek for information on this subject: Please be welcome.

I sent this interview to my very successful friend in Brooklyn. For 10 years he had been fighting for a “place in the sun,” until he finally succeeded in obtaining a “white collar job.” He had worked as loader, as a New York taxi driver. … But he should take note of his tribal brother living in far-away Krasnoyarsk, who within the same period of 10 years has been churning up the manure from the stable of Soviet history. He is clearing the living country of all the dirt, the country in which he was born and where he is going to die because this is Birger's predestination, imposed on him by the God he does not know.