Will the locomotive be back by the year 2006? 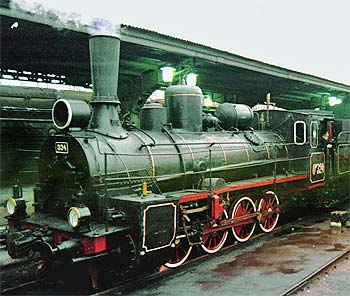 It was not granted to Stalin’s “Project of the century” – the construction of the northern railroad line from Salekhard to Igarka – to force itself through the permafrost and the impassible taiga. Its construction started by means of GULAG prisoners in 1949 from both ends at the same time – the Obsk region (the strictly confidential Object No. 501) and Igarka (Object No. 503). And in 1953, after the death of the leader, the whole action was more or less abruptly stopped. Parts of the equipment were transferred to the possession of different enterprises. Many valuable objects, however, such as loscomotives, rope winches and lifting jacks, cutters, dump cars, hald-built bridges and roadbeds, were left with the taiga – to corrode by the course of time.

In these very places we still find today the skeletons of former camp barracks. In one of them survived a child’s bed made of etal, probably welded together by some skilled prisoner. A couple of more solid and comfortable lodgings of the guards have been preserved, too – there are wallpapers, which were nailed to the walls at that time. It had obviously not been considered worthy to supply this remote region with glue or paste. In 1991 they set up an consecrated a cross in Yermakovo – in memory of those, who were killed during the construction of the polar railroad line.

From time to time people interested to take part in an excursion, are taken to the place, which is situated about 120 km away from Igarka, by steamer. Otherwise, Yermakovo is being plunded by other visitors, in spite of all prohibitions, by whoever feels like doing it: wild hordes of tourists, passionate searchers and collectors, representatives ov television stations from abroad and enterprising hunters for metal. These days the employees of the Museum in Igarka received shocking news – two rare locomotives, so-called “Little Sheep”, had disappeared. Nowadays, no more than 12-14 engines of this type can be found in the whole country – they are true historical relicts. 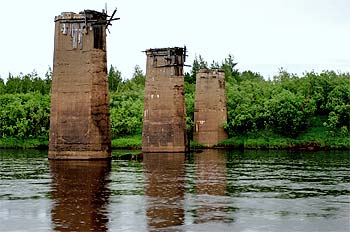 - When we learned about what had happened, we immediately set out for the former Object o. 503, accompanied by representatives of the Igarsk Department of the Interior, - reports Marina Mishechkina, the director of the museum. On the spot we noticed only two out of four locomotives, whereby these remaining two had already been knocked down, ready to be transported away. On the river there was a barge, on the banks – a hoisting crane and a tractor. In Yermakovo a whole brigade from Svetlogorsk was working hard. The workers reported that they did this job by the order of the director of the Kureysk hydroelectric power station, who, on his part, had reeived corresponding instructions from the head of the Turukhansk region – Simon Yurchenko. The workers told us that the losomotives, as far as they had heard, were to be transported away for restoration and repair. But why did they not inform the representatives of the museum about these plans in advance? And they would not show us a single official piece of paper, either.

- Still in May, rumours were circulating that the locomotive were to be scrapped, - says the director of the museum affiliate – Alexander Toshchev. We did not believe them, because something like that was impossible to happen in our opinion. We also do not exclude another variant – the “Little Sheep” are to be sold.

The legend of their restoration merely came up, because the matter started to cause unfavourable comment. By the way, the workers themselves are not at all happy about the fact of being involved: it seems that one after the other is being hit by calamities. One of them unexpectedly died, another stumbled, had a fall and suffered a fracture of the skull-base – they had to call for the air-rescue service. And this is what the workers say themselves: “Strictly speaking, we are desecrating a huge cemetary by our work. The dead are probably taking revenge …”

So far the question about whether or not these unique locomotives will be taken back to their previous eternal stop remains unsettled.