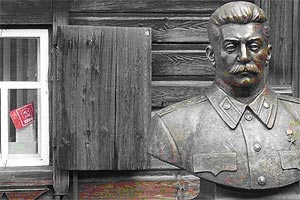 A Stalin bust was put up in Krasnoyarsk on Friday. However, it did not stay on its pedestal for more than three hours – the evening before, the local authorities, which had earlier given their permission, withdrew their decision and declared that no Stalin bust was supposed to appear in the city.

According to the latest information passed on to “Gazete.Ru” (newspaper; transl. note), the communists paid the sculptor 350.000 rubels for the realization of the bust (350 kgs in weight). Out of this amount 100.000 rubels were contributed by a member of the “United Russia” party.

Stalin’s bust was put up in Krasnoyarsk on Friday. The scandal about it had already broken out in the middle of April, when a group of veterans, supported by the regional committee of the RF Communist Party, took the initiative to erect a monument to Josef Stalin in the city. In response to these plans the chairman of the local “Memorial” Human Rights’ Organization, Aleksey Babiy, sent a letter of protest to the mass media, stating that the erection of a statue would “not only mean a serious offence to all victims of political reprisals”. It would also “represent a big step towards a totalitarian regime”. Both the appeal of the veterans and the written protest were discussed during a session of the Municipal Public Committee in charge of the naming and renaming of objects in the city. The majority declared the putting up of a Stalin statue inappropriate. By that time the members of the commission proceeded on the assumption that the erection of busts of Generalissimo Josef Stalin and Marshal Georgiy Zhukov could be realized inside the memorial complex on Shakhterov street. However, Petr Pimashkov, mayor of Krasnoyarsk, after having visited the redesigned memorialplace, announced that this matter was finally settlen. Neither in this place, which was to be reopened on May 9, nor in any other place would appear Stalin’s bust.

Nonetheless, the local communists, without having received the permission of the authorities, put up Stalin’s bronze bust in front of the old wooden house on Markovskiy street No. 27, where “V.I. Lenin worked in April 1897” and where nowadays the Municipal Committee of the RF Communist Party is housed.

About 20 people, mostly pensioners, came to attend the formal inauguration of the bust.

The chairman of the Municipal Committee of the RF Communist Party – Bedarev – declared: “On the eve of Victory Day we want to show this bust to the public to make them understand that we do not do things on the sly. The bust was made by the Krasnoyarsk sculptor Vasiliy Sivtsev. I would like to add that many veterans feel rather offended that the authorities did not permit us the putting up of the bust inside the Victory Memorial on Victory Day. However, we do not give up hope that it will be erected in Krasnoyarsk some time in the future. It is just a question of time. Anyway, there aremuch more supporters of this plan than opponents”.

According to the words of the deputy of the Municipal Counsil of the RF Communist Party, Sergey Maslov, the authorities cheated two-thousand veterans of the money they collected for the realization of the project. “After his meeting with veterans a month ago, governor Khloponin promised to permit the erection of a Stalin bust in Krasnoarsk. However, after this holiday, he returned fom Moscow with an entirely different attitude, clearly pointing out that there would be no bust at all”.

On the eve of Victory Da, the governor of Krasnoyarsk Territory, Aleksander Khloponin, in fact, announced: “There will not be any Stalin bust in Krasnoyarsk at all. I do not like these speculations about the matter. I would like to ask all residents of Krasnoyarsk to stop these useless discussions, all the more the evening before Victory Day”. He expressly pointed out that there would be no Stalin bust at all, neither before nor after the holiday. Moreover, he referred to the decision of the municipal administration with regard to this issue: “I have the opinion that the genocide in Russia has never been worse than during the time of talin’s rule. But his role as a generalissimo of the Great Patriotic War shouldnot be underrated. If we are talking about the perpetuation of his memory, then I agree to name him in one breath with other great military leaders, such as Zhukov, Rokossovskiy and Konev”.

The mayor of Krasnoyarsk, Petr Pimashkov, refrains from giving any comments about why the municipal authorities changed their position all of a sudden. His deputy, Vasiliy Kuimov, explained that the bust was not suitable for being exposed inside the memorial complex, due to its size. “Apart from this, we do not know, whether the sculptor of the bust agrees to having it put up in this place. And as far as the permission of the municipal administration is concerned, this issue is not our business at all. The communists might erect the bust in their office building – nobody can and will prohibit them from doing so. For the memorial place Stalin’s photograph will do, the photo, which has been among the exhibits already since long”, - said the official.

The inauguration of the bust did not go without scandal. A short time after the “opening” representatives of the “Memorial” organization appeared on the scene. The deputy chairman of the organization, Valeriyh Khvostenko, repeatedly stated that such actions of the pensioners “are a disgrace for the town”. – “The only possibility to get to a compromise is the putting up of the bust beside a funeral stele – with the names of all executed persons and victims of reprisals ebgraved on it”,- he said. The veterans, however, were not prepared to listen to him, but angrily pushed him away.

As it turned out later, the whole scenery had not been genuine. Three hours later the chairmanof the Municipal Committee of the RF Communist Party, Vladimir Bedarev, announced that the “ceremony” had been carried out for “presentatuion” purposes only.

Anyway, three hours later, the bust was veiled by some cloth. They took away the rope which had fixed thebust on its black pedestal, loaded it in a car and – went off.

The representatives of the RF Communist Party did not comment the question about where the sculpture is going to be kept.

It is possible that the municipal authorities were informed in advance about this scenario – for (strange to say) not a single militiaman was to be seen on Markovskiy street during the whole “ceremony”. So far there has not been any official statement from the part of the Krasnoyarsk administration. Although the chairman of the Krasnoyarsk Municipal Council, Vladimir Chashchin, declared that the actions of the communists werenot legitimate. “The decision concerning the erection of statutes has to be made in strict accordance with the prevailing law and order policy”, he said. He did not say a word, however, about whether or not the organizers of the action will be prosecuted.

As the newspaper “Gazeta.Ru” earlier reported, the Ukrainian prosecutors went back on a decisionof the deputies of the Livadiysk settlement counsil (after sharp protests of the public), who had permitted the erection of a monument to the honour of the particpants of the Yalta Conference in 1945 – Rossevelt, Churchill and Stalin. The monument was supposed to be put up just beside Livadiysk Palace. Almost at the same time the authorities had refused to permit the putting up of sculpture made by Zurab Tsereteli on the territory of the Panorama Museum “Battle of Stalingrad” in Volgograd. And in Omsk the munisipal counsil refused a proposition of some veterans to rename one of the streets downtown into Stalin street.

In the meantime we learned that a Stalin monument is going to be erected on Victory Square in the akutian town of Mirnyi on Victory Day. Maybe, they will also put up Stalin’s sculpture in Belgorod – such a proposal was brought in by the regional Veterans’ Counsil. However, Yevgeniy Savchenko, governor of the Belgorodsk region, already explained that the decision about the erection of Stalin’s statue on Battle of Kursk Square has to be made in Moscow. “This is a matter of federal importance”, - he said.