One must not plunder a cemetery 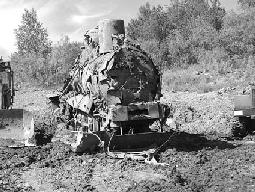 These days the museum in Igarka received a letter from the former political prisoner Walter Ruge, who intends to make a trip on the river Yenisey in June 2006 together with a group of West-German cinematographs, in order to visit the settlement of Yermakovo – the place where he spent all the years of his internal exile. What is the Center of the former GULAG Construction Project No. 503 to answer this man, who is in possession of the biggest collection of photographs showing impressions from Yermakovo?

I have been to this place many times myself. In 1997, for example, I took detailed video records and pictures of all locomotives, numerous buildings and all kinds of objects which outlived time. What I, accompanied by representatives of the militia, saw on the 4th of August this year brought something very shocking to light. The settlement had been burrowed through in the literal sense of the word.

On the banks of the river a dishevelled-looking locomotive with badly damaged appearance tenaciously resisted its loading. The field paths had been rutted and devasted by crawler tractors. A great number of trees and bushes were seriously damaged, too. A profound inspection of the area made clear that all big metal-bearing objects had been transported away from the different districts of Yermakovo, among them rails and various kinds of equipment. Out of four locomotives only two were left. All this is witnessed by video recordings.

It is difficult for me to believe that such an action was carried through with benevolent intentions – or would someone, who wants to keep in memory a whole historical epoch and hundreds of thousands of innocently killed people, ever do something like this?

For about half a century peace has been prevailing in Yermakovo, which, merely from time to time, was disturbed by a couple of fishermen, by tourists and all kinds of explorers, who came to this place by steamers. How do we explain to the people, who are attracted by this place for different reasons, why the settlement now looks so deserted and bare and wha we do not succeed to keep away the profit-seeking. In my capacity as director of the museum I even had the opportunity to listen to the reproaches of those, who loaded the locomotive on board the barge – they blamed the museum for ostensibly not taking care of the conversation of the locomotives.

By the way, there is nothing surprising about it – initiative is never in demand, but always punishable. The project concerning a decree of the Igarka municipal administration to declare Yermakovo and the former camp zones around a “historical-architectural area of local significance” was proposed and developed by museum employees, and although the control over its execution is incumbent on the municipal administration, nobody else but the devotees of the museum think about the preservation of the camp zones with aching hearts.

We are constantly insulted by cinema men and fanciers of commercial collections, who prefer to sell museum pieces on auctions, for always politely asking them to commit their collected objects to the museum, instead of leaving them with private owners for later profiteering. It is not quite clear, who put the head of the Turukhansk district, S.G. Yurchenko, on the wrong track by telling the “Krasnoyarsk Worker” that the locomotives “are part of the exhibits which were entered into the museum inventory early in the 1990s”. The Igarsk museum was opened on July 1st, 1991. Until 1996 it had not even been dealing with a description of Yermakovo.

As for the locomotives, which are standing within the historical-architectural zone, we can say for sure that they principally have never been exhibits – and we cannot think of such a thing, either. They represent a value of antique character in a historical zone of particular importance. As they need to be preserved, administrative controlling measures of the State came into force. During a conversation with u,s the supervisors of the loading procedure, N.I. Kotov and P.F. Kuzmenko, who, according to their own words, were sent to Yermakovo upon the instruction of the director of the electric power plant in Kureysk, V.G. Bardyukov, pointed out that it was a great strain for them to feel that they “were carrying away everything from a huge cemetery”; they continued that they were incessantly being hit by accidents or had to cope with defective technical equipment.

On the whole these people are right. Thousands of prisoners died in the camps; they were buried, but there are no gravestones. In the settlement of Yermakovo it is now practically impossible to locate any burial places anymore, since the exiles and camp prisoners were merely buried with a number fastened to their toes; however, nobody put up any tomstones (a fact confirmed by information obtained from the archives of the corrective labour camp in Vorkuta). The Yermakovsk locomotives do not only represent an example of the technological development of the passed century, they are also some kind of symbolic memorial pieces reminding of the tragedy of the Stalin era in an admonishing way. It is hard to imagine that in the near future nothing will remind one of these objects anymore. Buildings and bridges are destroyed forever, the remaining locomotives transported away – “destination unknown”.

M. Mishechkina,
director of the Museum of Permafrost in Igarka.
“Krasnoyarsk Worker”, 24.08.2005