Anna Andreevna Staitz (Maisner), born in the hamlet of Sagaiskoe in 1953. 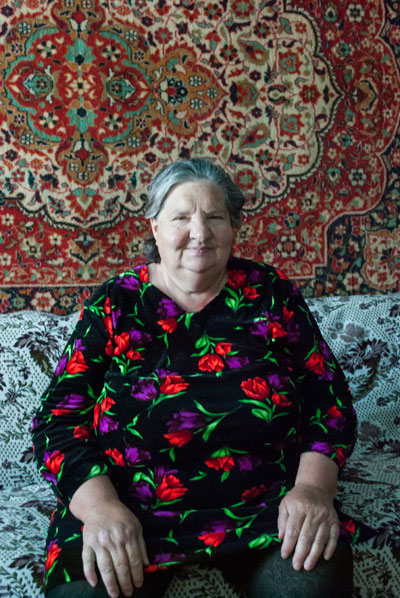 We lived under one roof with my husband’s parents for twelve years. Then we received an apartment, and we lived separately. We often talked to them, and they were always willing to share their remembrances. At home they used to speak German, so did we, and later our children knew the mother-tongue of our family, too. The eldest son grew up with the grandparents.

The parents of my husband Viktor Augustovich Staitz had been deported to this place from the Volga Region. In September 1941 August Genrikhoich Staitz, born 1912 and Yelisaveta Genrikhovna Staitz (Schefer/Schäfer), born 1910, as well as other residents of the hamlet of Straub in Kukkus District, Saratov Region, were taken to the train station by barge. They took along what they had been able to bundle up in haste. The whole action was, of course, performed to quickly, so that many things had to be left in the houses. Afterwards they were transported to the town of Uyar, Krasnoyarsk Territory in freight-cars, under degrading conditions. Annuschka (the daughter) was just one month old at that time; Frieda and Maria were a bit older. They were accommodated in barracks in a special settlement not far from Uyar. Many families lived in these barracks. The father was mobilized to the labor army almost immediately after their arrival; they mother had a job: she was asked to keep a jealous watch over the grain. They had a hard life and were even jailed, when they had pilfered cereals. The mother once found herself for a week behind bars, as well, for some reason or other. Then they released her, because her little children were waiting for her at home. The residents of the special settlement were subject to permanent registration with the commandant’s office. Foodstuffs which they bought in Uyar were handed out to them against food stamps. They spoke Russian badly and mainly used the German language, but life forced them to learn this foreign language. Fortunately, they were not confronted with any signs of animosity or aggressive behavior. There were lots of deportees in Uyar, not only Germans, but members of other nations, too.

August Genrikhovich was mobilized to the labor army in the Sverdlovsk Region, in order to build a railway line. Later they sent him to Vyjerkhniy Kuzhebar, where he was forced to work for TrestBasStroi. When August Genrikhovich returned home from the Labor Army in 1949, they family had been transferred from Uyar to the special settlement in Vyerkhniy Amyl, Artemovsk District, Krasnoyarsk Territory, where they remained under supervision till 1956.

After their rehabilitation they removed to Sagaiskoe.

The children attended school, when they moved to Vyerkhniy Amyl; there was an aerodrome, goldmines. The older sisters worked as gold washers. On general there were many deported people in that place, who had jobs in the mines or in school. Maybe this is the reason for why there was no noticeable hostile attitude. In the settlement were many Germans, which resulted in the fact that their mother tongue was not buried in oblivion: among each other they would practically always speak German. The husband’s mother worked in the settlement for the bath house, the father took care of the horses at the aerodrome. They were under constant supervision and lived in barracks, but conditions of life were better than those in Uyar; they did not have to freeze. Lots of berried were growing in that place, which they did not just eat themselves, but also berried for sale.

August Genrikhovich‘s sister Yelisaveta Genrikhovna Gleim (born on 24.08.1915) was also deported from the Volga Region. However, she happened to get to the district of Boguchansk.; later she was transferred to the Artemowsker District. And when they were finally released, she left for her brother to live with him.

After they had been rehabilitated in 1956 they set out for Sagaiskoe, where they bought a house. Daughter Yekaterina Augustovna Gartwig/Hartwig (Staitz/Steitz) got married and began to lead her own life. The second daughter, Anna, got married, too, while Frieda, their third daughter stayed to live with them. She died of diabetes at the age of 24. They had a good life here, owning a little farm, and there were many Germans around. The mother had a job for the pig farm. Katja worked as a milkmaid all her life.

Nonetheless, cooking traditions were preserved. They liked to prepare in their special way noodles, baked pancakes, gingerbread, doughnuts (dough based on curdled milk, rolled out, cut into pieces and then fried in oil). They cooked compote, added some kind of dumplings and added milk. They also used to roll out potatoes and from this dough prepared something like vegetarian pelmeni. They really enjoyed cooking.

They would sing songs in German and read prayers. They were in possession of a German Bible. At funerals and during christenings they often sang chants. We called this procedure “immersion”. We were all immerged, but our grandchildren have already been baptized. Every now and then, on Sundays, neighbors came over for a visit, mainly women. They liked to sing songs, pray and occasionally cook together. Either talked about her grief, others about things they were excited about.

They did not want to leave for Germany as many others did. The husband’s father would always say: „We are from Russia, from the Volga. In Germany nobody is waiting for us“. Some relatives left Russia; in Germany, however, they met with refusals and unkindness during the first time. They got to hear comments such as: who you think you are, after all; who told you to come over here!?

Of course, they felt aggrieved and hurt that they were treated in such a way. They had lived there life, they had owned their little farmstead, after all. Later, after they had gathered together their documents for the application of their rehabilitation, they received a payment of compensation. And then they definitely made peace with their fate. Son Viktor Augustovich got married, as well, and left his parents’ house. The daughter Maria Staitz lives in Karatuskoe.

My parents, Andrej Wilhelmovich Maisner/Meisner (born on 18.08.1930) and Lidia Christoforovna Maisner(Meisner (Werner, born on 25.09.1926) are Volga Germans, too; at that time they lived in Kukkus District, in the hamlet of Straub. They were also deported in September 1941. They were taken up to the railroad station by barge, from where they were then sent to Abakan. There they were picked up by horse-carts. Their father and his family were taken to Sosnovka, the mother to Kop. Both of them were still children at that time.

The father and his brother went to school and at the same time worked in a brigade. They went into teaching with a blacksmith and learned how to shoe horses and repair hay carts. They were handed out food stamps and every now and then would receive foodstuffs from the kolkhoz farm. In the very beginning they were not engaged in farming on their own, but later they managed to build their own vegetable garden.

The mother had five brothers and sisters. She worked for strangers, taking care of their vegetable gardens or their children. My mother began to work at the age of ten – she milked cows. At that time Kostya Filippov was the head of the kolkhoz farm. He selected the little girls, who were supposed to work for the dairy farm. They went to school at the same time. The mother performed well at school and was later appointed accounting officer. Filippov behaved well towards the deportees, he would never insult or affront anybody; he allotted food ration cards or gave out natural produce, whenever someone was in need. He invited them to drink milk while milking the cows, but he told them that they were not allowed to take any milk home. Unfortunately, one of the brigadiers was malicious: when he saw that the girls drank from the bucket, he beat them with a whip. Later somebody complained about him. The head of the kolkhoz farm heard about it, he came along and said to him: if you dare to touch any of the girls once again, while they are drinking milk, I will chase you away with the same whip. They are not allowed to take any milk with them, he said, but as long as they are here, they may drink as much as they can. The girls have to be fit for work after all. At first they lived as subtenants. Afterwards they were provided with a house. In the place of residence the relation towards the exiles was also normal; nobody would offend them; people were even willing to help them. Later they got to Karatuskoe, where they bought a house of their own..

Father and mother became acquainted with each other in Karatuskoe, when he went there to train as a tractor driver. They got married. Until his retirement he worked as a blacksmith. They had four children: me, Yekaterina Maisner, Alexander Maisner, Maria Maisner.

My father loved to play the accordion and to sing German songs.

In our family it was tradition to celebrate Christmas on the 25th December. On Christmas Eve we would decorate the Christmas tree. Everybody appeared, sang songs and gifts were prepared for the children. On New Year, however, there were no gifts, although we also used to celebrate this event. And Easter we celebrated, too, either the German or the Russian. We were somehow unable to identify ourselves with all these festivities, but nowadays everything is completely mixed up, such as our relatives. There are Mordvins, Armenians, Russians, Tatars and knows who else.

We never thought about leaving for Germany; mother died early, father lives all alone. And we, the children, did not want to emigrate. 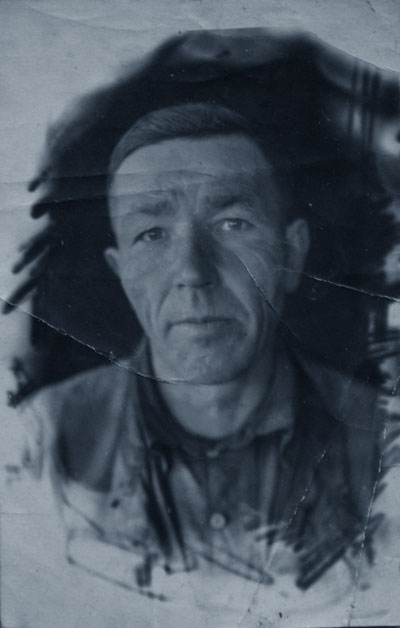 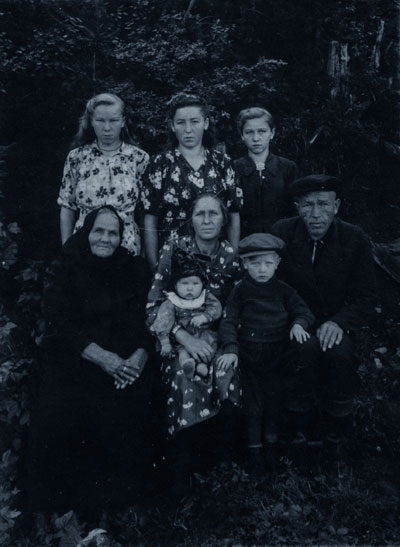 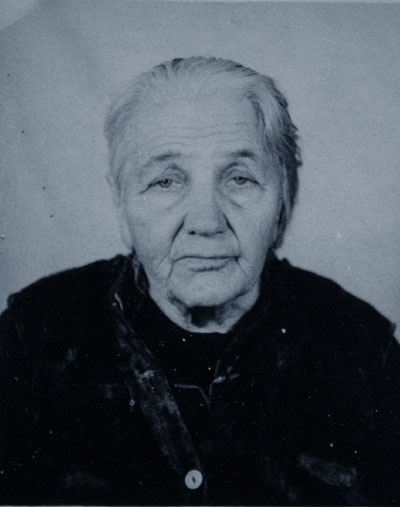 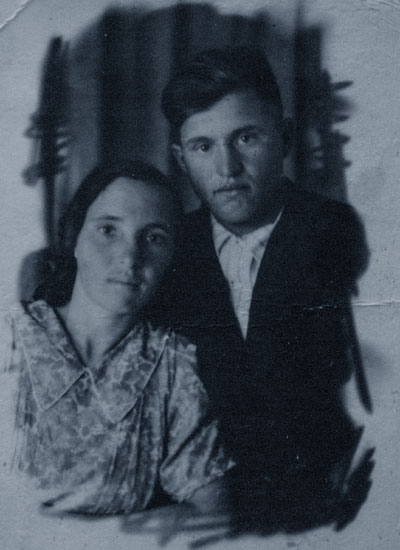 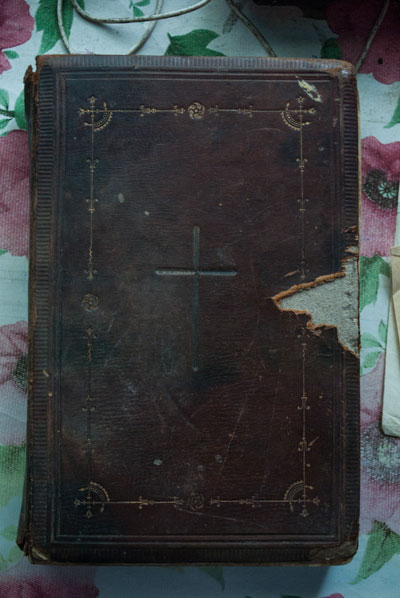 The Bible of the husband’s parents in German language, 1905 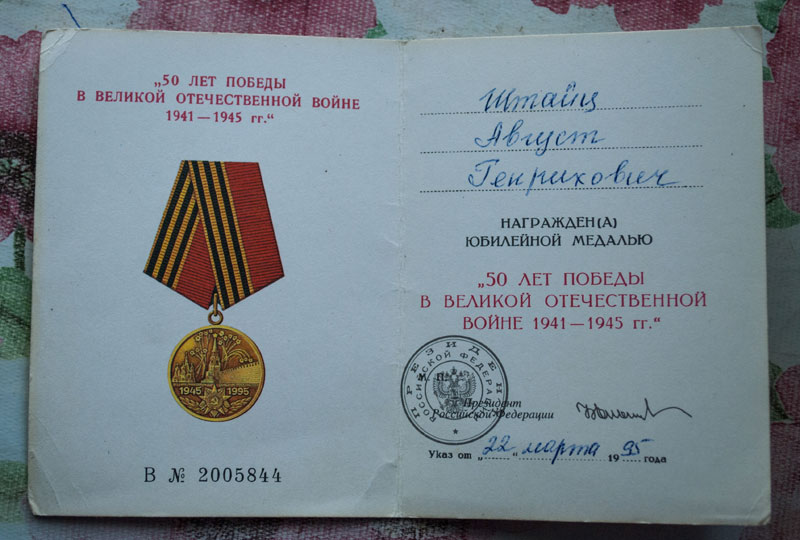 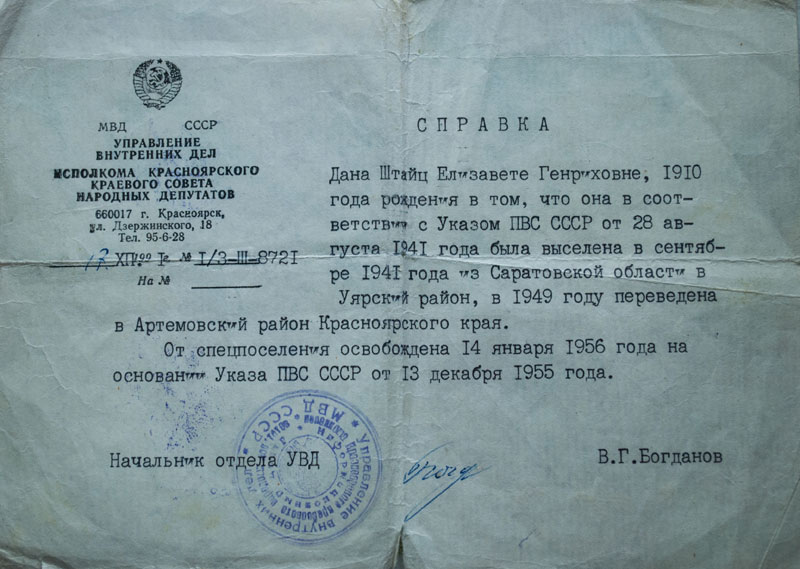 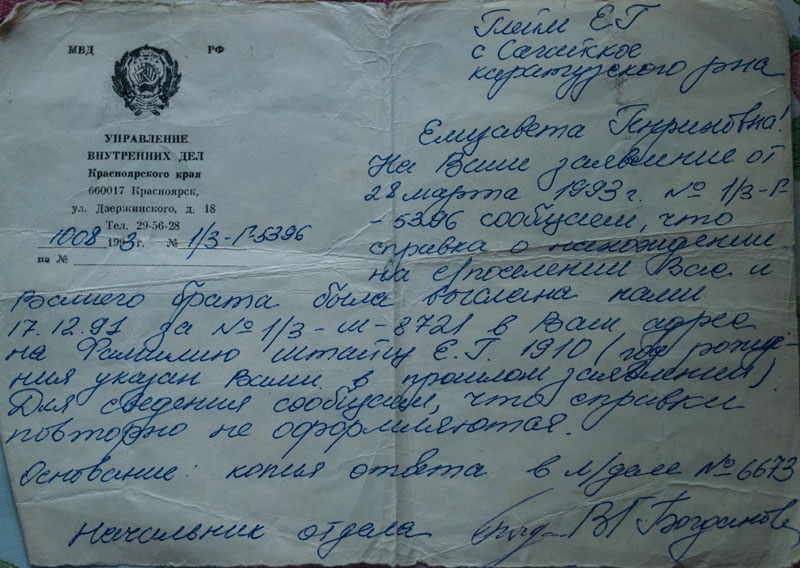 The interview was held by Tatyana Nazarets.

Expedition of the V.P. Astafev State Pedagogic University Krasnoyarsk and the Krasnoyarsk „Memorial“-Organization on the project „Anthropologic turn in social-humanitarian sciences: Methodology of field research and practical experience in the realization of narrative interviews“. (Sponsored by the Mikhail-Prokhorov Foundation).