On the 3rd of March, on the occasion of a project carried out by the People's Assembly on "The elimination of administrative obstacles in social life as an instrument in the fight against poverty", an expert team of social organizations of the city of Krasnoyarsk is making a trip to Yenisseysk. The project is supported by the Heinrich-Böll-Foundation. The action is carried out by the Krasnoyarsk "Memorial" organization in close cooperation with the Human Rights Information Center and the Regional Organization of Consumer Protection. In Yenisseysk the activities will be organized by the Yenisseysk School of Pedagogics - one of the partners of the Krasnoyarsk "Memorial" organization.

Nowadays people in Russia have quite a wide-ranging access to free social services (in the medical and educational sectors, etc.), but also to social allowances for different categories of citizens, the granting of which is guaranteed by the State. In practice, however, it has become apparent, that people are sometimes unable to take advantage of these social services and allowances. The reasons for this are a lack of information about the rights to claim such services and allowances, vague or even entirely wrong ideas on the realization of financial support, as well as a complete ignorance about who to appeal to and how to find the institution, where the desired social assistance is being granted, but also numerous administrative obstacles, which the people are confronted with, before the can finally avail themselves of these social services. And sometimes one can even state violations of civil rights.

The prupose of the trip is to give free legal advice to the citizens of Yenisseysk and to arrange meetings with local human rights organizations and representatives of the social welfare administration. The interrelated subjects of these advisory discussions are utterly wide-ranging: problems occuring in connection with the rehabilitation of victims of political reprisals, consumer protection, the granting of social allowances to women and children. Moreover the "Memorial" organization is going to hold a lecture on the history of political reprisals in the Krasnoyarsk region before Yenisseysk students of the upper grades, and there will also be a meeting with history teachers in the Yenisseysk School of Pedagogics.

The human rights activists in Yenisseysk

On the 3rd of March 2004 the citizens of Yenisseysk had the opportunity of receiving free legal advice on various social problems. This action was carried through on the occasion of a project by the People's Assembly on "The elimination of administrative obstacles in social life as an instrument in the fight against poverty". The project was supported by the Heinrich-Böll-Foundation.

Human rights organizations do not exist in Yenisseysk. Legal consultants do not charge less than 50 rubels. And so the visit of the representatives of the Krasnoyarsk "Memorial" organization and the Information Center of Human Rights, who gave free legal advice, met with great response. Suffice it to say that, within one day only, sixty-four people took the chance of talking about their problems and asking for legal advice.

Most of them (46 persons altogether) were victims of political reprisals. This fact is not really surprising, since the Yenisseysk region was one of the main places of internal exile. There also was an advisory telephone service - people from far-away villages called and asked for advice. The consultations concerning rehabilitation problems and the possibilities to grant rehabilitated persons allowances they are entitles to were lead by Tatyana Lavrentevna Moiseeva, jurist of the Krasnoyarsk "Memorial" organization. She was assisted by Alexey Babiy, chairman of the Krasnoyarsk "Memorial" organization, who handled the most typical and less complicated problems. T.L. Moiseeva talked to victims of political reprisals and informed them in detail about the allowances they are entitled to, about characteristic problems of the rehabilitation procedure, as well as of the measures that lead to the final decisions on possible allowances. As was to be expected, the main problem was based on the fact that people do not know about their rights to any allowances at all; for that reason all the information material distributed during this action was very well accepted: section 16 of the Rehabilitation Law and others.

The jurist of the Human Rights Information Center, Nina Arkadevna Rybnikova, led the consultations on the problems of receiving financial support on the housing sector, allowances for medical care, special allowances for teachers in rural districts, etc.

Tatyana Vladimirovna Shashkova, expert on questions concerning the protection of mothers and child education of the Yenisseysk Administration of Social Security, took part in the teamwork.

The chairman of the Krasnoyarsk "Memorial" organization, Alexey Babiy, realized a meeting of pupils of the upper grades, students of the School of Pedagogics and history teachers from the town of Yenisseysk and the Yenisseysk region.

The Yenisseysk town library was given a number of literary materials, brought out by the People's Assembly on the occasion of the project on "The elimination of administrative obstacles in social life as an instrument in the fight against poverty".

The organization of the action carried out by the Krasnoyarsk human rights activists was excellently supported by the Yenisseysk School of Pedagogics, particularly by its teacher Maria Valerevna Kholina. 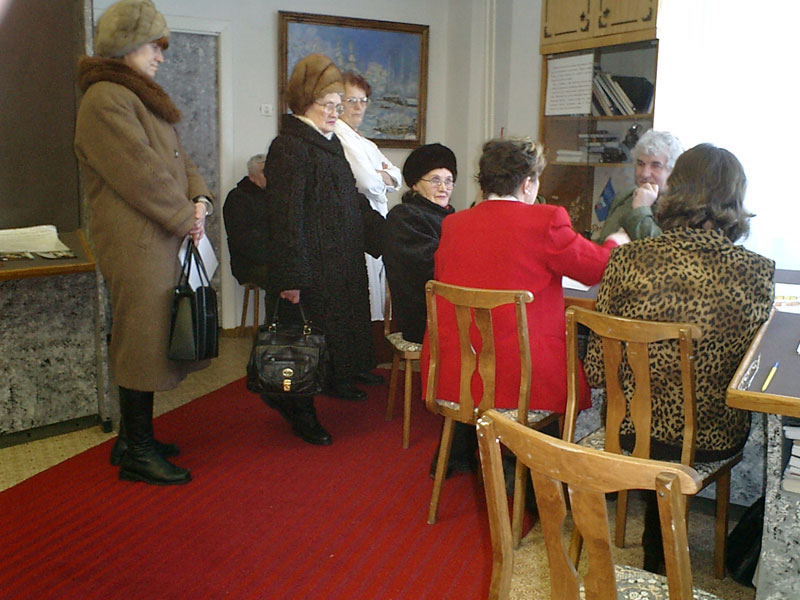 The consultation hours start at 9.30h 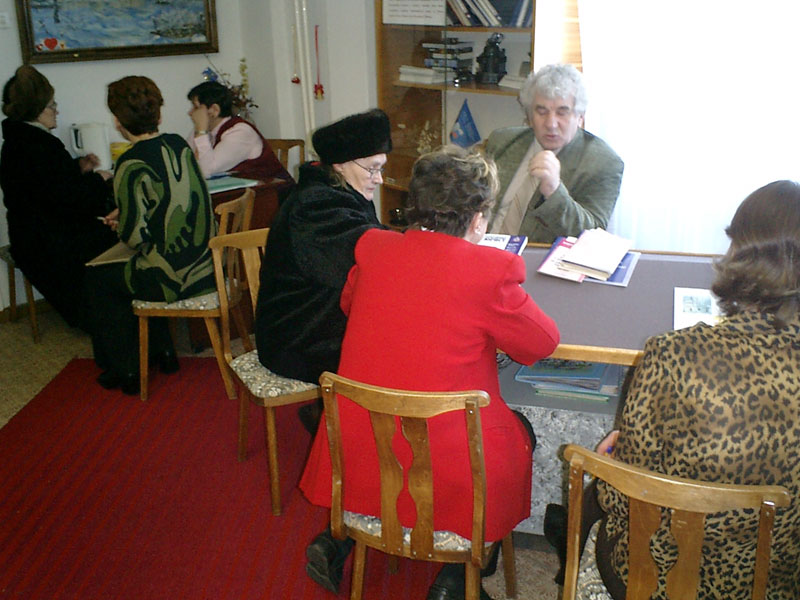 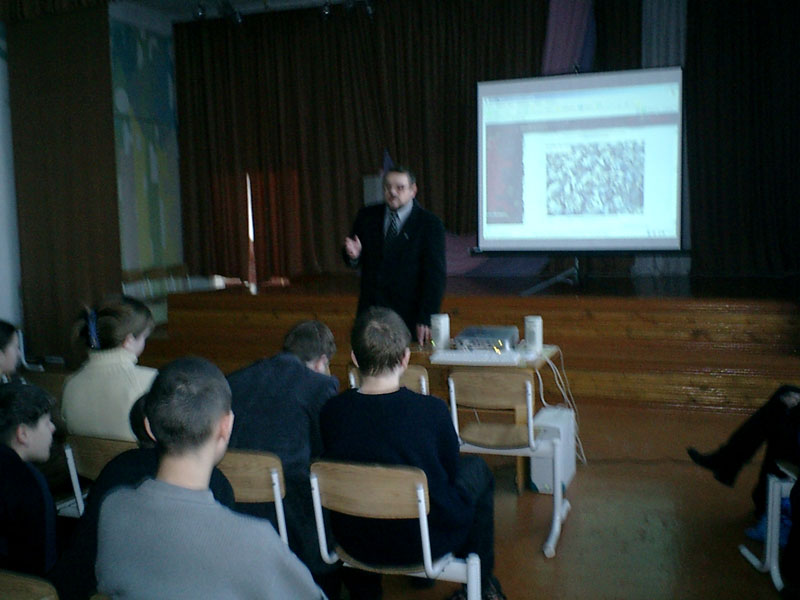 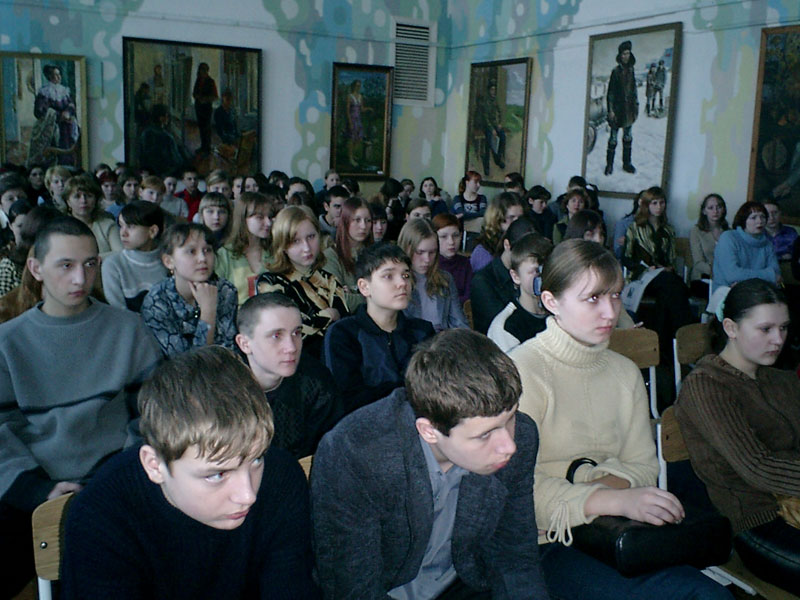 A nice, comfortable building. Clear faces. The hall is full.