Opening of the exhibition „Daddies letters“

The exhibition „Daddy’s letters“ presents a specific kind of evidence from the Stalin epoch – letters written by prisoners, addressed to their children. By means of such letters fathers, who had been torn away from their families tried to keep in contact with their children, have a certain influence on their education, guide and instruct them by showing them affection and care. From one letter to the next they conduct a serious conversation with their sons and daughters, whereby they are anxiously trying to broaden their horizon, arouse interest in their own favorite occupation and pass their knowledge and philosophy of life – for this remains their only heir.

The letters of their fathers, carefully preserved by the children, are now with the archive of the International „Memorial“ Organization in Moscow. Just one of the seven heroes introduced in the exhibition returned back to his family. Four of them were shot by a firing squad, after they had spent several years in prison, two died from hunger and hard labor which was beyond their strength.

The prisoner of the Solovki Special Purpose Camp – Professor Aleksei Feodosevich Wangengeim, organizer and first boss of the united hydrometeorologic service in the USSR, did not only turn the letters to his daughter into a herbarium by using all kinds of plants growing on the island, he also converted them into real schoolbooks of arithmetic.

Professor Gavriil Ossipovich Gordon, prisoner of the Dmitlag, once scientific secretary of the Institute of Pedagogics, sent his children two booklets – a sort of essay about world history and philosophy.

The prisoner of the Siblag, Vladimir Vladimirowitsch Levitskiyj, chairman of the philatelists‘ society in Kursk, made ethnographic drafts for his son by providing his letters with numerous drawings.

They were all hoping for a reunion with their children. However, their dreams did not come true – none of them returned home from the camp.

Nonetheless, their efforts to educate their children „from distance“ were not without success. The children continued the activities of their fathers becoming scientists, pedagogues, researchers and philatelists.

At the exhibition, in the „regional block“ they introduced letters of the first director of the „Stolby“ Nature Reserve written from the camp – letters by Aleksander Leopoldovich Yavorskiy as well as the member of staff of the Khakassian Regional Department of Finance - Jonathan (Johann) Gottliebovich Distergoft. This part of the exhibition was prepared by the Krasnoyarsk „Memorial“ Organization in close cooperation with the Krasnoyarsk Museum Center.

For the realization of the project were used state funds (grants) in accordance with the command of the President of the RF dated the 29.03.2013 N° 115. 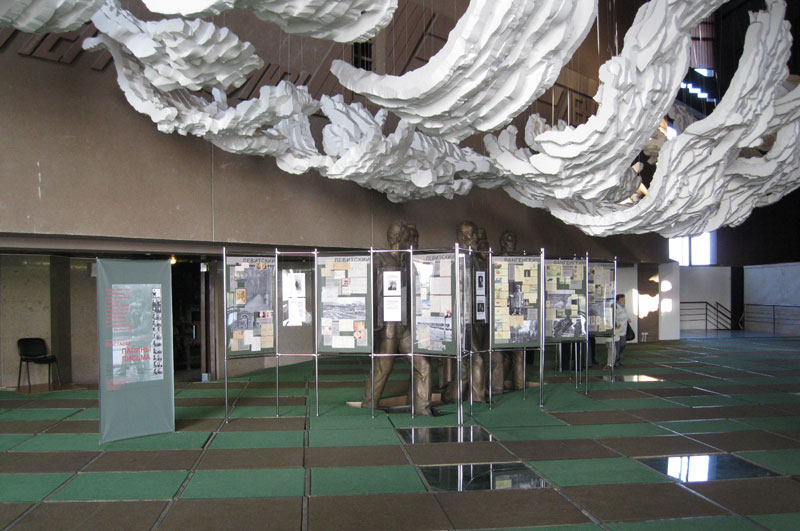 Due to an entanglement of circumstances the exhibition „Daddy’s letters“ took place in the midst of art objects of different periods of time, trends and directions.
Directly above – „Cloud of Paradise“, a new project by Vadim Maryasov,
with whom the Krasnoyarsk „Memorial“ has been closely and successfully cooperating for a long time. 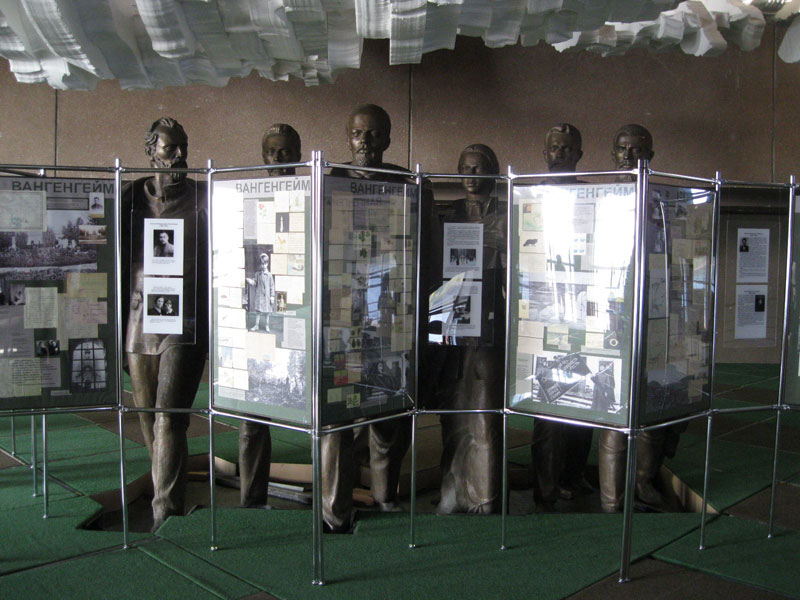 Behind the stands Lenin, Krupskaya, Krzhizhanovskiyj et cetera are peering; the remained there from the time when the Krasnoyarsk Museum Center was still called Lenin Museum. 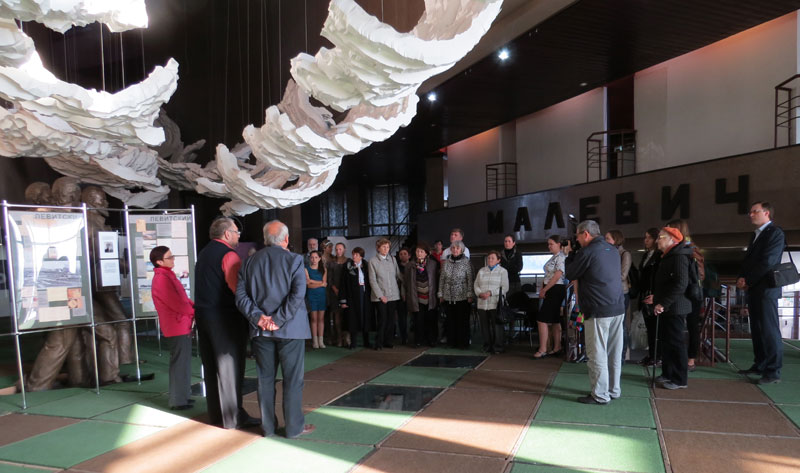 And to the right side of the exhibition – the Art Manifest of the Museum Center by Sergey Kovalevskiy, headline „Malevich“, designed in mausoleum style.

By the way, in spite of the sunny day it was quite cold inside the Museum Center.
Do not be surprised that many visitors, particularly old ones, appeared in warm outerwear. 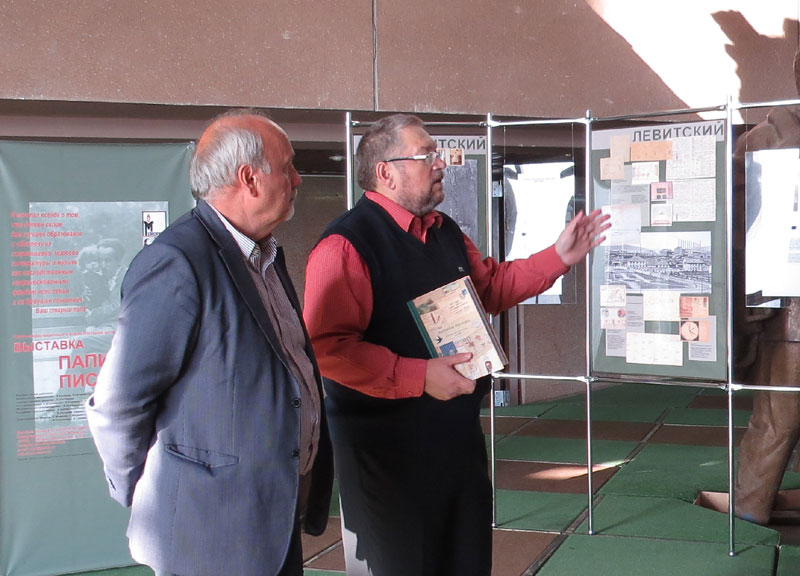 The exhibition is opened by their regional coordinator Aleksei Babiy.
In his right hand he is holding a remarkable anthology with camp letters, which was particularly prepared for the exhibition of the International „Memorial“-Organization. 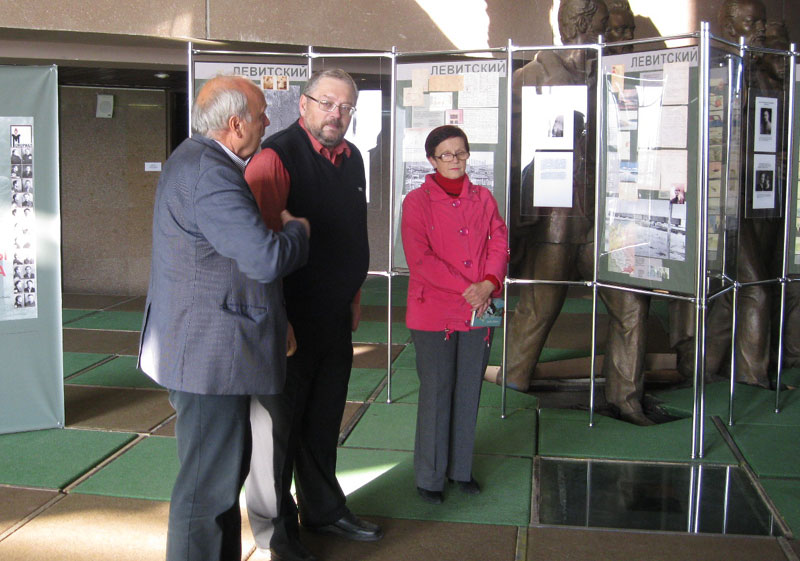 The director of the Krasnoyarsk Museum Center Mikhail Shubskiy Natalia Mikhailovna Sigarev, daughter of „Inusya“ Distergoft, who was dedicated one of the regional stands, is reading poems to the honor of her father –
Jonathan Gottliebovich Distergoft. 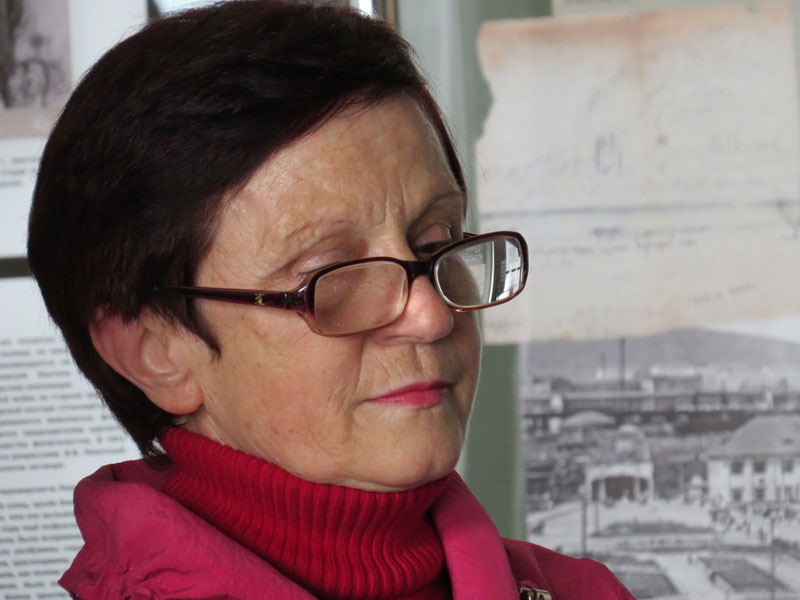 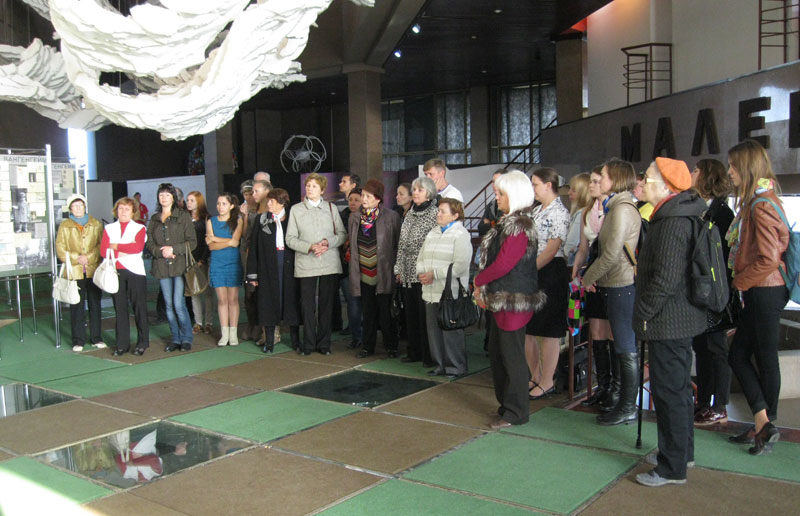 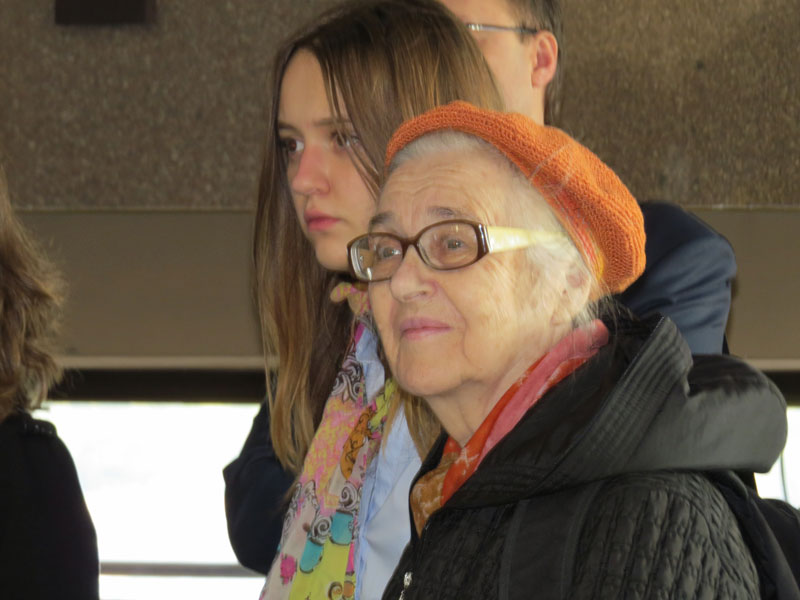 The exhibition has been opened 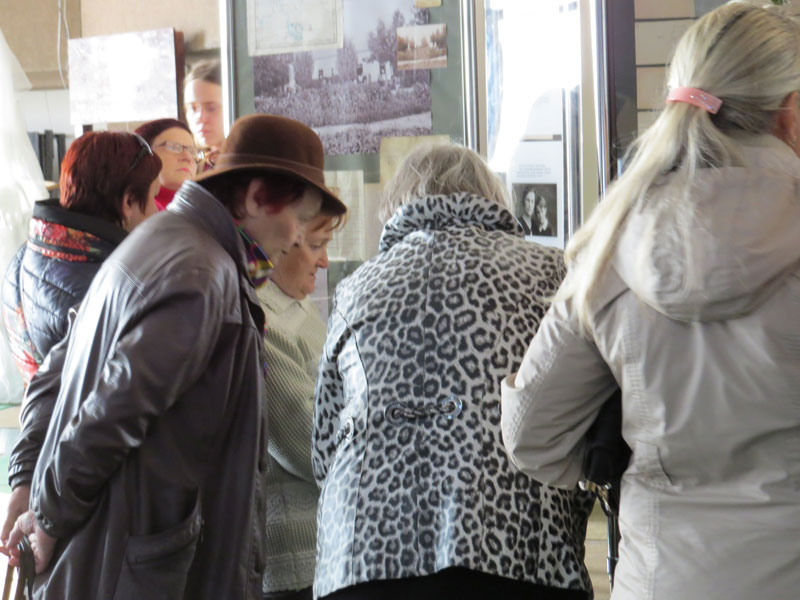 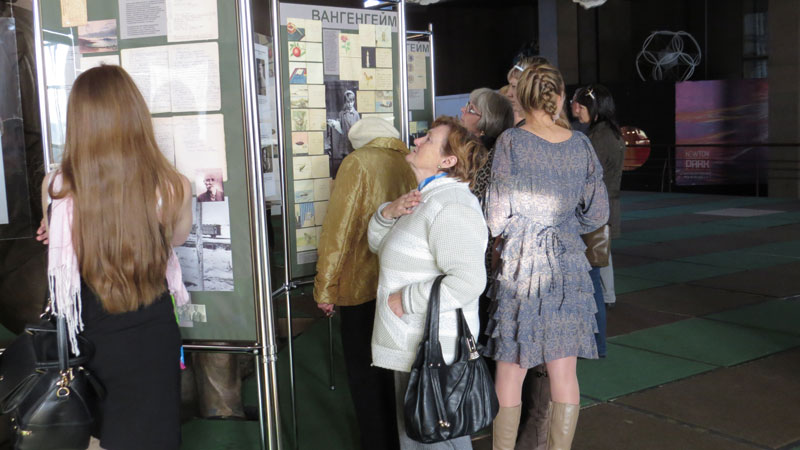 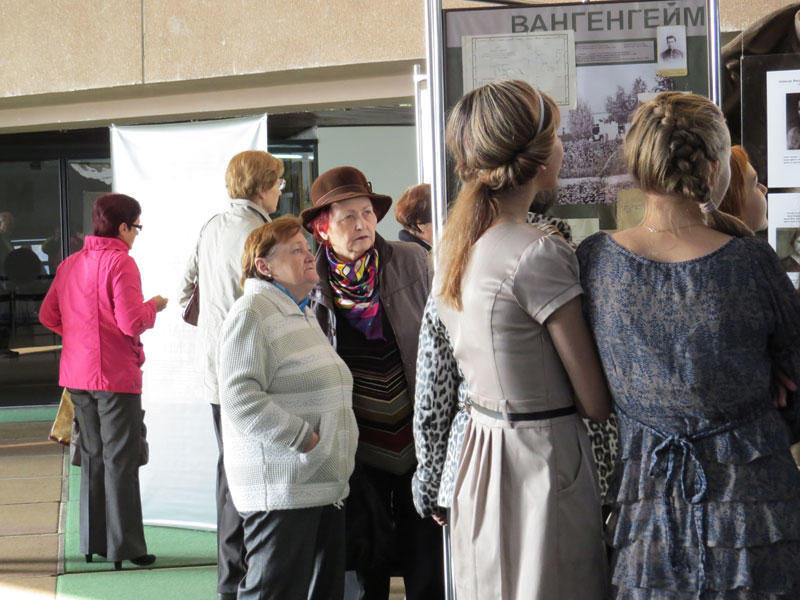 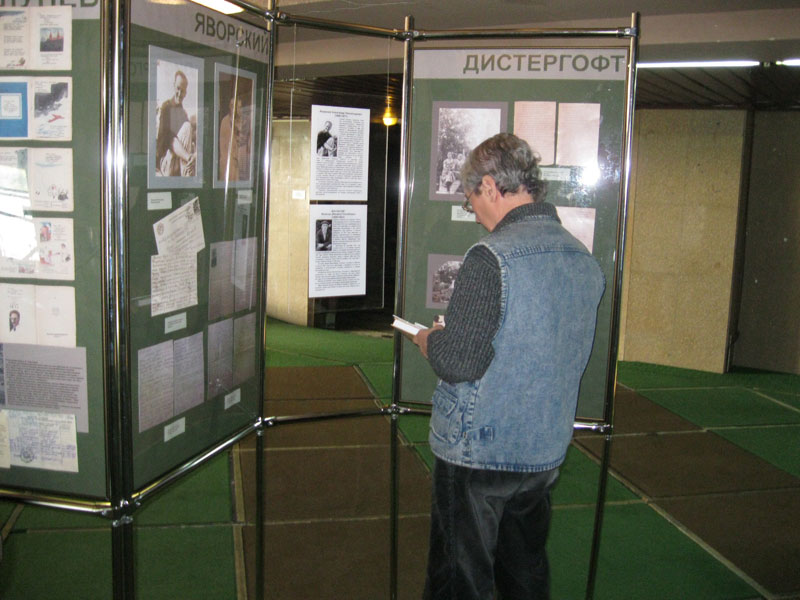 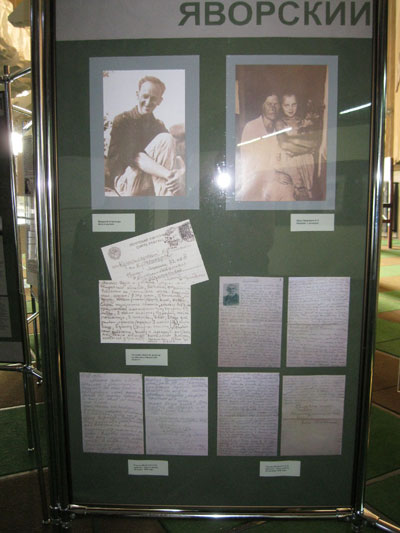 You can read more letters written to wives and children from camps, prison or exile on our website: