19.12.05 The regional seminar „Present-day problems of civil and patriotic education within the general school and college system” took place in Yeniseysk. It was organized by the Yeniseysk College of Pedagogics and the Krasnoyarsk “Memorial” Organization.
Photo report 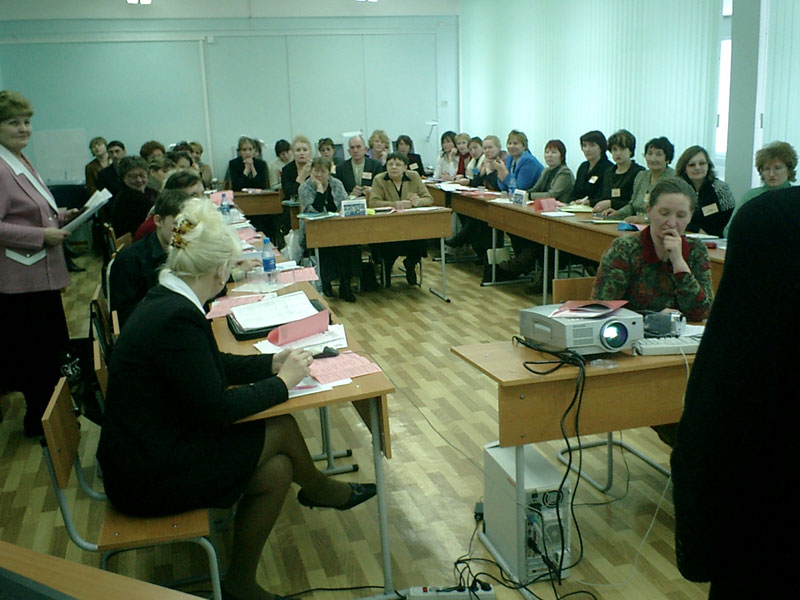 09.12.05 The second volume of the Book of Memory, issued in commemoration of the victims of political reprisals in the Krasnoyarsk region, first saw the light of day.
Press release

21.11.05 On the 19th and 20th of November the seminar „The Internet Resources of the NGOs (non-governmental organizations; translator’s note) – an Important Instrument to Work with Mass Media and the Public is going to take place in Krasnoyarsk. It was organized by the Citizens’ Center on Nuclear Non-Proliferation (CCNN) with the co-operation of the Krasnoyarsk “Memorial” Organization and the “Maxsoft” Company. The seminar was financially supported by a grant given by the Commission for Democracy of the USA Embassy in the Russian Federation.

Yesterday the Day in commemoration of the victims of political reprisals was celebrated in Krasnoyarsk.

On October 28th the editorial office of the „Krasnoyarsk Worker“ installed a telephone hotline dedicated to the Day in commemoration of the victims of political reprisals. Questions were answered by the head of the supervisory board of the observance of laws regarding Federal Security and international relations of the regional public prosecutor’s – Ludmila Vladimirovna Gurskaya, the head of the rehabilitation board of victims of political reprisals at the State Administration of the Interior – Tatiana Nikolaevna Kilina, the deputy official of social welfare of the regional administration – Irina Yulevna Miroshnikova, and the chairman of the Krasnoyarsk „Memorial“ organization of historical illumination and education, human rights and charity – Aleksey Andreevich Babiy.

On October 29th a methodic seminar was held in the Krasnoyarsk Center of Culture and History for researchers dealing with the subject of „Political reprisals in the USSR“. 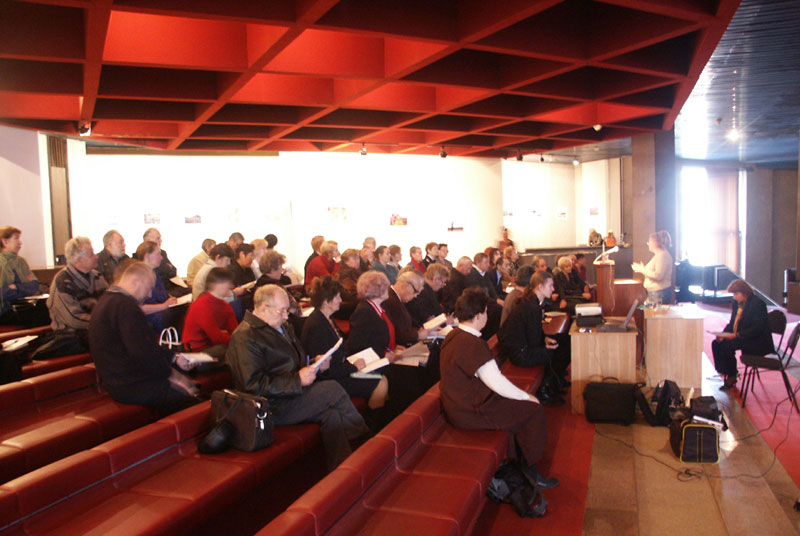 On October 30th, at 12 noon, an event took place under the motto „So that we will recall ... So that it will not happen again ...“. It was organized by regional human rights’ organizations, the „Memorial“ organization, the political parties „Yabloko“, „Right Alliance“ and the „Republican Party of Russia“. 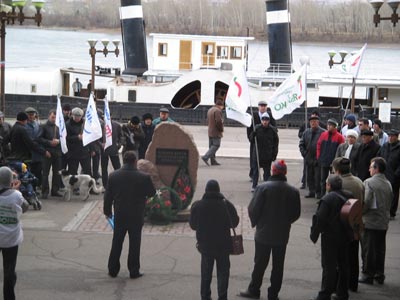 On OCtober 30th, at 3.30 pm, the exhibition „Stalin’s retouching“ was opened. The exhibition based on the book by David King of the same title („Polgart“ Publishers, Budapest, 2002), was prepared by the Krasnoyarsk „Memorial“ organization and the Krasnoyarsk Museum Complex of History and Culture. The exhibition gives the visitor the possibility to realize with his own eyes the mechanism by the aid of which Staln made use of the art of photography, in order to make a way for himself to unlimited power, and to even completely erase the remembrance of its victims. On the orders of the dictator, all those were entirely „removed“ from group pictures, who, in the course of the political purges, suffered from persecutions; and the photos showing mass scenes were „corrected“ in such a way that they created an illusion: the great Stalin is enthusiastically cheered by much more people than it was the case in reality.

On October 30th, at 4.30 pm, a concert was given to the honour of the victims of political reprisals in the Small Hall of the Philharmony. 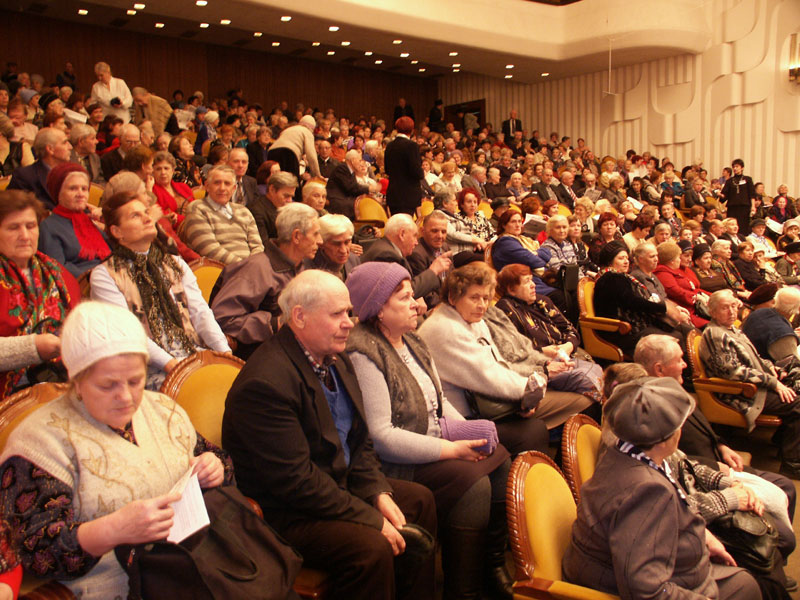 At 6 pm a commemoration meeting was held in memory of the victims of political reprisals at the memorial stone. Afterwards commemoration festoons and candles were lowered to the waters of the river Yenisey. 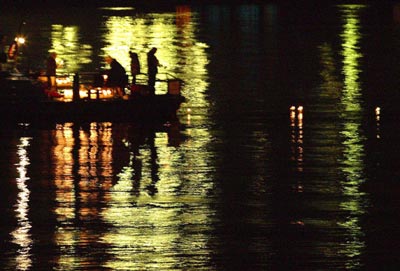 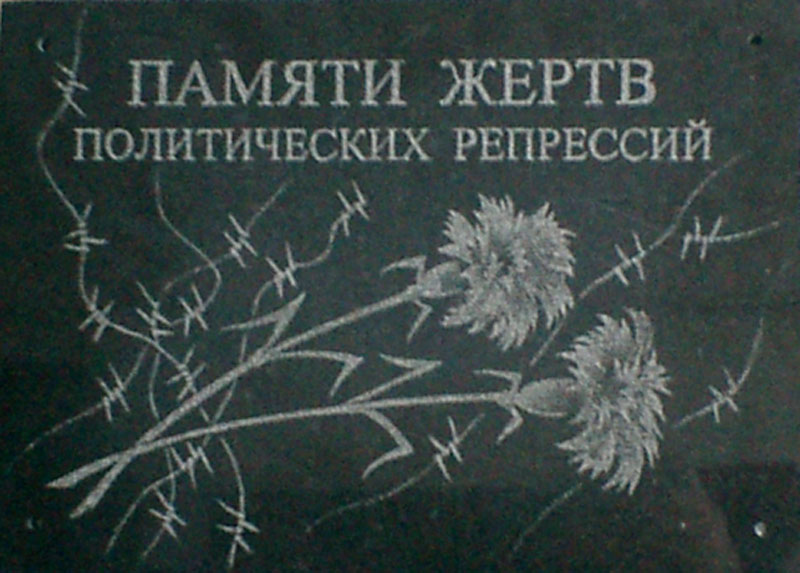 URGENT! Locomotives were stolen from the former Camp 503 in Yermakovo. 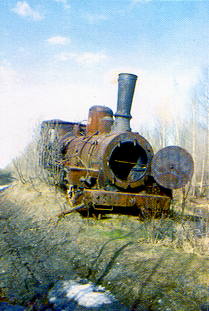 As we were informed, very rare locomotives were stolen (and have possibly been destroyed already) from the territory of the former Camp 503 in Ermakovo. We are shocked about this act of vandalism. The only memorial of the history of the GULAG in the Krasnoyarsk region sustained an irreparable loss.

Without regard to the intentions behind this grand larceny, this is a barbarian deed. We demand and insist on the immediate taking of all necessary steps to find and punish the culprits. We consider it to be imperative to declare the settlement of Ermakovo and the preserved camps of the Construction Project No. 503 a memorial zone.

18.07.05 From June 29 until July 12 was carried out the second expedition of history, human rights and ecology. It was organized by the Yeniseysk College of Pedagogics and the Krasnoyarsk “Memorial” organization. This time we worked in the village of Potapovo (Zyrianka) in the Yenisey district.
Foto-Report

02.06.05 We received an official reply from the Krasnoyarsk municipal administration. There will not be a Stalin statue in Krasnoyarsk. The project was declared to be inadmissable. We are satisfied with this decision. Thus, the action „No room for the murderer in Krasnoyarsk“ has come to an end. Read details – on the action website. 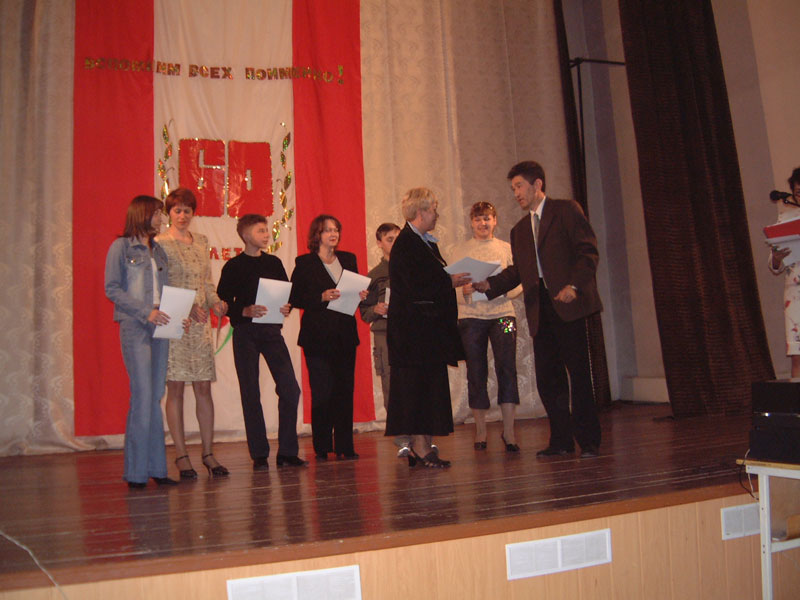 19.05.05 In the municipal Pioneer and Student Palace took place the regional presentation ceremony for the participants of the Sixth All-Russian Historical Competition for students of the upper grades „Man in history. Russia – 20th century“, as well as of the regional competition for students of the higher grades „Remembrance, responsibility, history, human rights“. The regional competition was carried out within the bounds of the project „Long-time echo. Human rights in history und today’s Russia“. The project was supported by the European Community.

Authors and project leaders of the best papers came from Krasnoyarsk and the central districts of the region to attend the ceremony – 136 persons altogether. 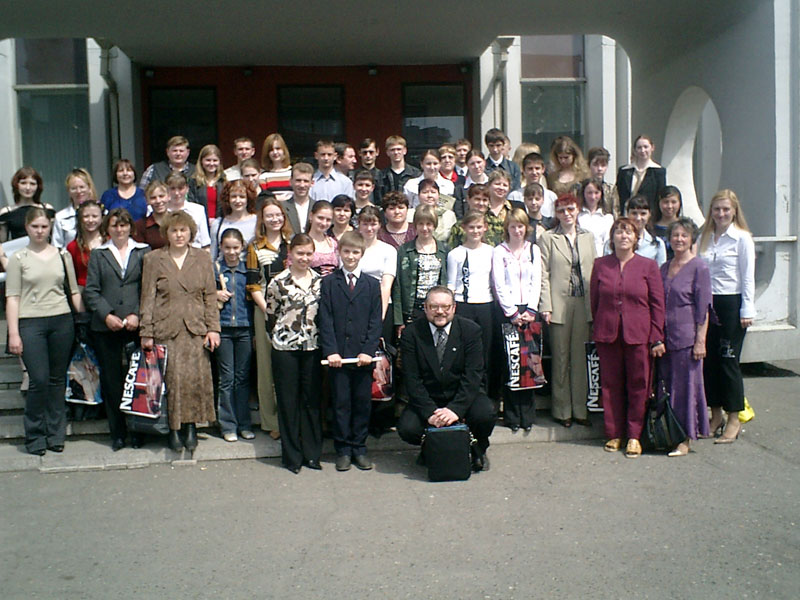 10.05.05 The Sixth All-Russian Historical Competition „Man in history. Russia – 20th century“ for students of the upper grades came to an end.
Details 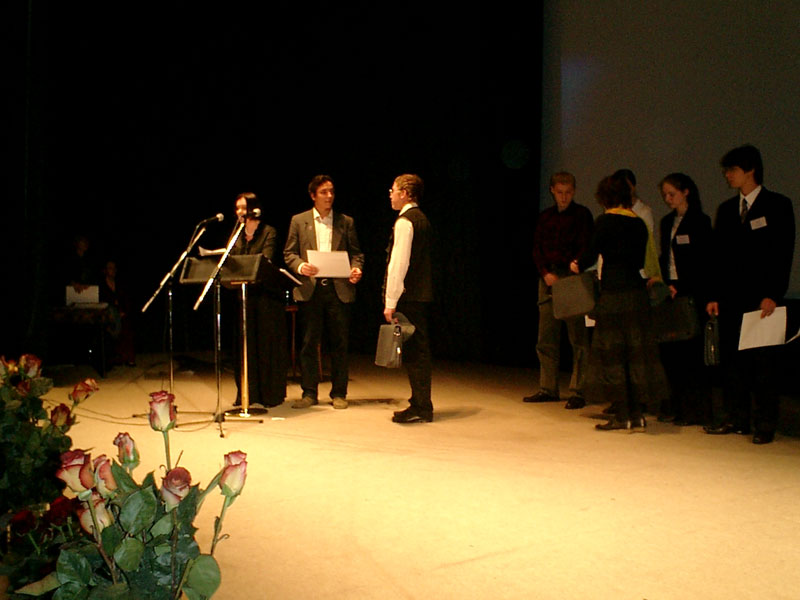 12.04.05 On the 11th of April the territorial department of the All-Russian Union of former minor Prisoners of Fascist Conentration Camps organized a great meeting. The event took place in memory of the 60th anniversary of the victory over fascist Germany, the 17th anniversary of the foundation of the International Union of former minor Prisoners of Fascism and the 10th anniversary of its Krasnoyarsk regional department. The meeting took place in the Krasnoyarsk museum complex of cultural history. On this occasion they also held a presentation of a book containing the collected memories of people from Krasnoyarsk – prisoners of facism (in the edition of which also took part the Krasnoyarsk „Memorial“ organization.
Photo report 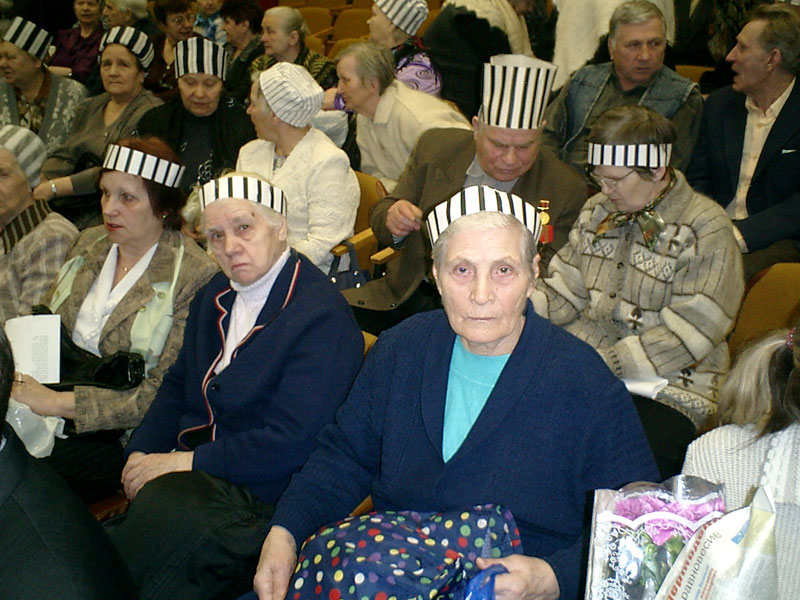 According to the version spread by the mass media the background of this murder is „the disreputable rivalry between subjects working in business“. Maybe, this is actually true – it is an undeniable fact that successful entrepreneurs are confronted with competitors and make enemies.

However, we have every reason to believe that this murderous dead is based on political motives. For many years Sergey was engaged in human rights activities. On the 5th of March he became the executice director of the territorial department of the movement „For human rights“. It is literally true that three days before his murder a human rights organization of business men had been formed on his initiative for the legal support of minor and middle business men. He was in exactly the moment when he was on his way to a meeting with Grigoriy Yavlinskiy. It was not the first attempt on Ulyashin and the officials of his firm: for many years he had been exposed to persecutions, not only by criminals, but also by the legal institutions. His cars were set on fire, he and his employees thrashed in an organized way. The violent methods were dropped, instead they started to bring actions against Ulyashin and his wife, which were entirely unfounded, and his company was put under the permanent control of militiamen and other officials.

Recently, Sergey was more than once menaced; it became obvious that someone intended to put him out of the way. He therefore appealed to the militia for help. However, the legal institutions did not react, i.e. they did not undertake any measures to protect him.

We demand a careful and conscientious investigation of the case, as well as the criminal persecution not only of the perpetrator, but also of those who back him and approve his doing.

11.02.05 The instructional center of the Krasnoyarsk „Memorial“ organization carried out a meeting with students of the village of Sukhobusimsk today. The talks were about political reprisals in the Krasnoyarsk region, the activities of the “Memorial” organization and a contest of students of the upper grades on historical subjects. As from today the Sukhobusimsk Museum of Local History and Geography is showing the exhibition “Before you were born”. 31.01.05 The 7th scientific-practical area conference of pupils of the upper grades and students took place in Yeniseysk on the 28th of January. Its subject: „Siberia’s culture: peculiarities and traditions“. The conference was organized by the Yeniseysk college of pedagogics. 114 young researchers from the districts of Yeniseysk, Pirovsk and Motygino took part in this event. They held lectures on history, sociology and literature. One of the heads of the plenum „The century of irrecoverable losses“ was the chairman of the Krasnoyarsk „Memorial“ organization. 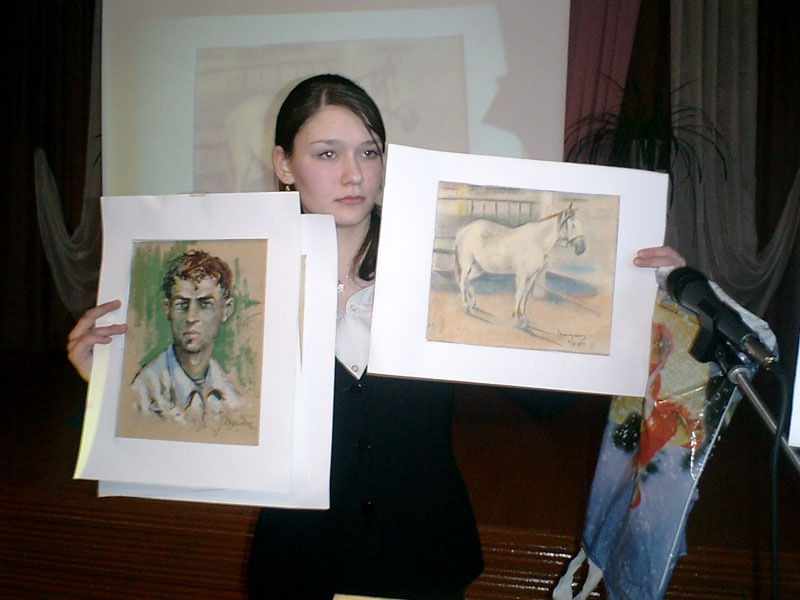